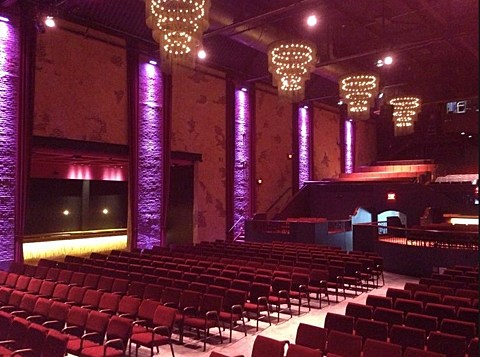 While the venue is new, the building itself has a rich history, beginning in 1927, when it opened as the Westbury Movie Theatre. It remained a popular facility until the 1970s, until attendance decreased dramatically. "It really became very, very delapitated, and ultimately closed down," said Michael.

The building's current owner, Cyrus Hakakian, was planning to tear down the building and turn it into retail. But when examining the building's interior, Michael said Hakakian had a change of heart. "He was so impressed with the majesty of this building," Michael said. [LI Herald]

Bowery Presents, who already handle the booking for NYC shows at Mercury Lounge, Bowery Ballroom, Music Hall of Williamsburg, Terminal 5, and a few other venues on certain occasions (not to mention expanding to Philly, New Orleans, Boston, and South), has now taken on a new Long Island location: The Space at Westbury. Not to be confused with Hamden, CT's The Space, The Space at Westbury is a 1,500-capacity venue located on 250 Post Avenue in Nassau County's Westbury, NY, and it officially opens with its first show tonight (10/4).

Tonight's show is a stop on the Fountains of Wayne, Soul Asylum, Evan Dando tour (which also hits Webster Hall on Saturday). Tickets for tonight's show are available.

Check out the full list of upcoming shows here. Tickets to all Space at Westbury shows are available via Ticketmaster.