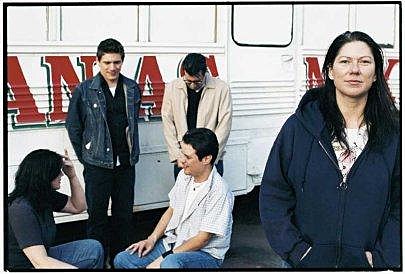 We are streaming a new song from MOUNTAIN BATTLES on our page for the next 7 days. It is called "We're Gonna Rise".

4AD sent out this press release earlier today about the new album:

4AD is pleased to announce the forthcoming world-wide release of Mountain Battles, the new album from The Breeders on Tuesday, April 8, 2008 (April 7 outside of North America).

The Breeders released their last album - Title TK - back in 2002. Since then, of course, Kim Deal has been part of one of the most highly successful and warmly received music reunions of all time, getting back together with the rest of The Pixies for a series of exhilarating live shows in 2004 and 2005. After that, Kim headed back to Dayton, Ohio to start writing a new record.

Mountain Battles is the result. It's an album which captures all the bittersweet electricity of classic Breeders records like Pod and Last Splash, and which breaks new ground at the same time; classic sounding, yet as relevant and exciting as ever.

Mountain Battles was recorded by Steve Albini at Electrical Audio in Chicago, Erika Larson at Stagg Street, Manny Nieto at Manny's Studio, at Refraze in Dayton and by Ben Mumphrey in the Basement.

The Breeders are : Kelley Deal, Kim Deal, Jose Medeles and Mando Lopez; Jose and Mando are both veterans of the Title TK campaign.

The Breeders will be playing live all over the world in 2008. Their schedule includes performances at Canadian Music Week and SxSW and Coachella, plus full tours in the USA and in Europe.

The Breeders are also set to play a full UK tour in April to mark the release of the album.

The Mountain Battles tracklisting is :