DOWNLOAD: Music is my Boyrfriend by the Hidden Cameras (MP3) 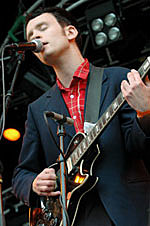 Jens hangs out with Sally (and the Hidden Cameras) too: "Now he uses the internet to connect with musicians he admires in the countries he is planning to tour. Not only do they help him out on stage, they let him sleep on their couches and show him around their towns. In Melbourne he hangs out with Guy Blackman or Sally Seltmann from New Buffalo and her husband’s band The Avalanches. In San Francisco it’s Nedelle and the guys from Call and Response. In Glasgow, Bill Wells. And anywhere, it seems, with the guys from The Hidden Cameras. If I were a musician it’s exactly how I’d like to do things." [Perceptive Travel]

Sally said, “My album was released in Japan on a label called P Vine and someone there emailed me and told me Jens Lekman loved my record. I’d started working on that song [‘Inside’] and thought it would be good to get a male vocalist, but I couldn’t really think of anyone. Then I found out he was coming here to do shows, so I got in contact with him and he came and sung."

Jens said, "Last monday i did some recording with Sally / New Buffalo in her house. It made me warm inside to meet someone who's so open and passionate about her music. she showed me some new songs that were amazing, I would never dare to invite a stranger into my home and play unfinished recordings just like that. I also met her husband, Darren from the Avalanches, I can tell you that I saw a lot of cool records in their house! They gave me some tips about good recordstores and me and my bassplayer Terese went to check them out."

The song in question is on New Buffalo's New Buffalo EP - out May 15 on Arts & Crafts. Here's the tracklist... 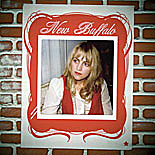 The Hidden Cameras are opening for Broken Social Scene at Prospect Park this summer. Tickets are on sale.

Last night (May 8, 2006) New Buffalo played Bowery Ballroom with no band. Sally sang to backing tracks and alternated between a keyboard and guitar. I didn't love it. Here's a picture: 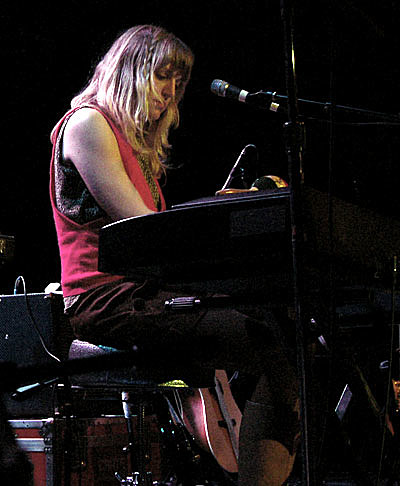 I did love the Concretes though. They headlined.

"So I went down to Hultsfred this weekend and I actually had a good time. I went down to play with the Hidden Cameras and before I left I asked Frida Hyvönen if she had a seat left in her car for me and she asked me why I was going there. To do a little guest appearance, I said. With who? she asked. With Snoop Dogg!" [Jens Lekman]