Photo by TV on the Radio's Dave Sitek 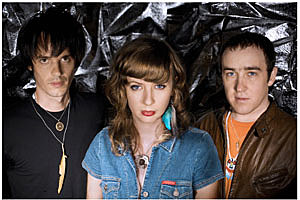 It's taken me a while to warm up fully to Celebration, but though I had my doubts before, the above new song has officially sold me on this band. I'm looking forward to hear the rest of their new album - "The Modern Tribe" out October 9th on 4AD. How was their show at the Pool with TV on the Radio? To find out more about the album name, and just what the band has been up to in general, check out a letter Katrina posted on the band's website, below...

I was so entranced by the excitement of these last few months that I had forgotten to update or post anything since February. This year so far has been nothing short of amazing. Starting with a 6 week recording session at Stay Gold in Brooklyn with all of our friends. I'm still feeling the love from it all. It felt magical from day one. We had the honor and privilege of working with the most talented people we know . We are so thankful to be able to do what we love with the people that we love, and we hope that the listener will feel that power when they hear the record. We are naming it "The Modern Tribe" for that reason. We have, for a while now, been working together on each others music, recordings and live. Each time is such an opportunity for growth and we have learned so much from our friends. It only seemed fitting to honor that by naming the record something that represents it. It is due out October 9th 2007, on 4AD. Shortly after recording we toured the states with The Blood Brothers. This was our second tour together. We were so happy they asked us to go out again. They and their crew, first of all, are some of the best people I have ever met. Unique beautiful hearts each of them. By the end of the first tour, we had managed to work out a way for some of them to join us on stage. By the second tour together we had it down and the very talented Morgan Henderson of the The Blood Brothers joined us for our whole set every night. playing keys, bass clarinet, and percussion. We were also joined by Cody Votolato guitarist of The Blood Brothers on half our set. His energy and enthusiasm were the perfect addition. Drummer Mark Gajadhar blew us away by embellishing on the new song "Heartbreak" most every night. Even vocalist Jordan Blilie sang a song with us in Seattle. On this tour we had the opportunity to play with some other great bands like, Moonrats, the Dead Science, Chinese Stars, Mika Miko and Triumph of Lethargy. The ultimate was when in Florida for one night, the two bands joined our good friends TV on the Radio and the Noisettes for an insane music mind meld. When the tour was over it was hard to say goodbye. We had become part of each others tribe and the two tribes became one. Currently we are working on the album artwork and preparing to add another player to our live set for this Fall. Be on the look out for some interesting remixes of songs from our new album.....
xoxo
Katrina