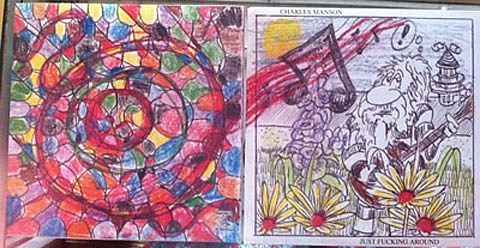 Manuel Vasquez defends the unusual product he's selling. But not everyone's buying it.

Vasquez is the 26-year-old co-owner of [LA's Beauty Is Pain Boutique] who produces records in his spare time. His latest release features music written and performed by convicted mass murderer Charles Manson.

"I've gotten some hate mail from it. There are people not appreciating the release of music by him," he said. "People say they don't understand why I'd want to associate myself with this or why I would be interested in releasing it."

Even his parents tried to talk him out of pressing and selling the 40-minute vinyl album.

"They're in their mid-50s and they grew up with a fear of Charles Manson," Vasquez acknowledged. "They don't want to have anything to do with him. They asked why I was doing it and did I know what I was getting into -- did I fully understand the extent of what it means?"....

...."I usually tell people that the perspective they have of Manson is what he was convicted for in 1969, not for what he became in prison," Vasquez said. "He is somebody who is obsessed with ecology and saving the earth, the environment and animals. Life is his obsession, not death."

The album's title, a vulgarity that means wasting time, reflects Manson's own description of his guitar playing that was recorded in the 1980s in a room above the prison chapel at California Medical Facility in Vacaville. Manson later gave the tape recording to a friend who eventually passed it on to a third person. After years of "badgering" that person for it, Vasquez obtained the tape last year.

With Manson's encouragement, he said, he set about creating an album. [LA Times]

That's a pictures of the record, that I found on eBay, above. That all said, this is not the first time in recent history that a new Charles Manson record has been released. In fact, a four part series of Charles Manson LPs is also coming soon .

I'm not sure if Beauty Is Pain is selling their new record online, though you can buy a Che Guevara t-shirt from them on Etsy.

The Hollywood store also hosts in-store shows. Not surprisingly, one of those in-stores featured another controversial figure with a fondness for swastikas - Boyd Rice, as you can see in the video below...