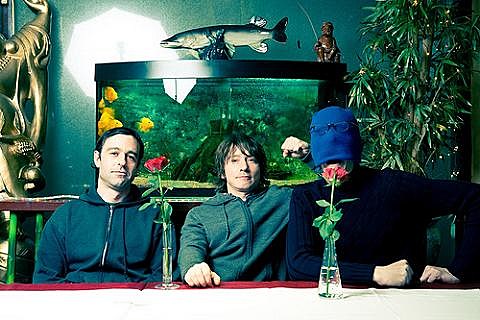 From a recent interview with Child Abuse:

Do you condone the abuse of children?
Tim: Only if there's something in it for me.
Luke: Absolutely not. Boring answer, I know... but who does condone abusing children?
Oran: No

Would you consider your music an appropriate soundtrack during the abuse of children, whether you condone the act or not?
Tim: Not really. I think Radiohead would be better. Actually no... Vampire Weekend.
Luke: Hmm good question... .I think the most perverse soundtrack would have to be something from the bel canto tradition... something light and airy... maybe a piece from a Verdi opera.
Oran: I don't think it's appropriate to abuse children to any music.

Somwhere in between noise, metal, and avant-jazz lies Child Abuse, the wildman trio from NYC that welcomed their new album Cut and Run via Lovepump United last week. The band recently debuted the new track "Bebe" via the Village Voice, but are welcoming a new song in the form of "Froze Toes" available for download above.

Child Abuse are celebrating the glitchy, cofrontational Cut and Run at a show at Glasslands on 4/26, with an assist from Mick Barr (who played Europa with Krallice, pics are coming), Skeleton$ and Grooms (who play PA on 5/5 with Hot Hot Heat and Bowery on 5/26 with Holly Miranda).

Some Child Abuse video and current tour dates are below.