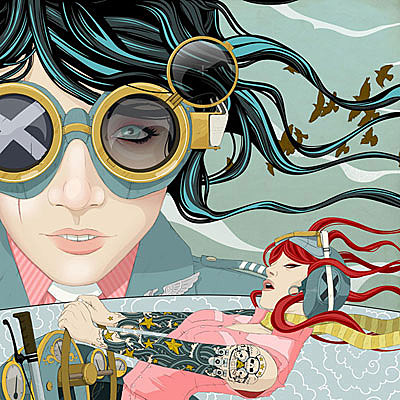 Okay, so the blood part is just a rumor (that I just started)....

This July the ever-growing relationship between comics and music reaches new heights as Tori Amos and Image Comics release COMIC BOOK TATTOO, a 480-page, full color anthology adapting the themes and ideas behind her songs into a lush volume of sequential art.

"I have been surprised, excited and pleasantly shocked by these comics that are extensions of the songs that I have loved and therefore welcome these amazing stories of pictures and words because they are uncompromisingly inspiring," says Amos. "It shows you thought is a powerful formidable essence and can have a breathtaking domino effect."

Editor Hoseley added, "While the connections between comics and music have been long established by generations of creators, Comic Book Tattoo is the pure distillation of how these two art forms inspire and feed off of each other across all the classifications, genres and styles of comic storytelling. Like Tori¹s music, these stories run the gamut of human experience, emotion and imagination brought to life by some of the most compelling and innovative creators in the field of comics."