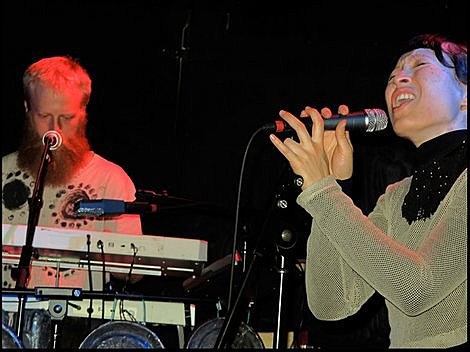 Little Dragon announced an early 2011 US tour promoting the release of their upcoming third full length album. The tour makes two stops in New York at Music Hall of Williamsburg on January 20 and Bowery Ballroom on January 21. Tickets are on sale. No openers mentioned yet.

Little Dragon are currently on an international tour (Europe, Asia, Australia, New Zealand) supporting the Gorillaz, whose most recent album Plastic Beach features Little Dragon on two tracks; "Empire Ants" and "To Binge." LD vocalist Yukimi Nagano also performs both songs live with the band (you may have seen her do it at MSG or on Letterman).

Speaking of Gorillaz, Damon Albarn has announced not only an upcoming Gorillaz album, but two other albums as well. According to an interview with Stuff, Albarn has plans for a second album by The Good, The Bad, & The Queen, and for an album by a new band he's a part of. The new band features Tony Allen (also of The Good, The Bad, & The Queen), Flea, and some of Albarn's "favourite African musicians will be involved also."

Stuff also asked Albarn if Blur, who released a DVD documentary this year, have any plans for a world tour or new album. Albarn responded, "There won't be another world tour for me - for anything - for five to six years; it would seem unlikely. I have a young daughter and it's just not feasible, it's too long away from home. This has been great, but it's too much after a while and so, no, there won't be any tours for me for a while, I should think."

Albarn has also been recording a new Gorillaz album on tour with his iPad. He told NME "I've made it on an iPad - I hope I'll be making the first record on an iPad," he said. "I fell in love with my iPad as soon as I got it, so I've made a completely different kind of record." Albarn wants to release the album "before Christmas."

Gorillaz recorded a new single "Doncamatic" with British R&B singer Daley which will be officially released on November 22 in three formats. The CD version also includes a Joker remix of the song, the iTunes EP adds the third track "Album Mix Tape," and the 7 inch single is "Doncamatic" with the Paul Harris remix of "Empire Ants" on side B. All three formats are currently available for pre-order. There's also a video for the song. You can watch it below.

Little Dragon also recently collaborated with Dave Sitek on one of the tracks off this year's Maximum Balloon release. Sitek more recently remixed the track "Be Africa" by France's Bibi Tanga . It has nothing to do with anything really, but it's being offered as a free download, so grab that mp3 above.

The Gorillaz video and all tour dates below...