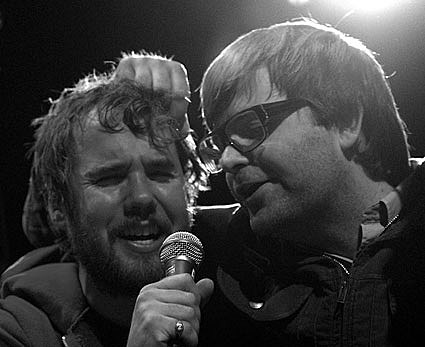 Death Cab For Cutie is coming out with a new album in May 2008. You can watch a trailer for it on their new website.

Also to look foward to in 2008: a collaboration between Death Cab frontman Ben Gibbard and Leslie Feist...

during a recent off day in Louisville, she and her touring band got the itch to roll tape. "We thought, day off? Let's just do something fun," she recalls. "Bowling? A hike? Instead, we rented a studio."

There, "we took turns and played together," she says. Feist "fooled around on some new stuff" and sang a Grizzly Bear song. She also recorded the basic track for a collaboration with Death Cab For Cutie's Ben Gibbard, which will appear on the "Red Hot and Indie" compilation being produced by the National's Aaron and Bryce Dessner. [Billboard]

For a taste of what Gibbard & Feist sound like together, download the Postal Servce remix of "Mushaboom that is linked on the top of this post - right over that picture of Ben singing with Feist's Broken Social Scene band-mate (and boyfriend) Kevin Drew. That photo was taken by Chona Kasinger at a "Spirit If" show in October - a few weeks before a member of Pavement played with Kevin in NYC..