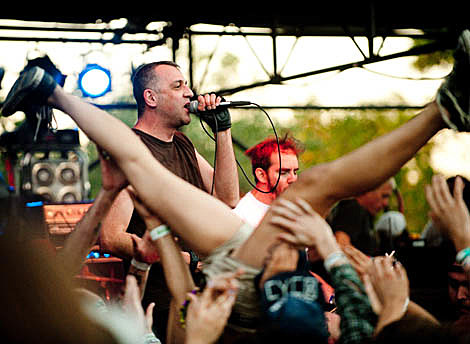 "THE DWARVES were kicked off tour with Motorhead for sleeping with the girls the aging metalheads had hired to hang out backstage. They were banned from venerable punk dive CBGBs for breaking a table and bleeding on the floor, making the venue cleaner and improving its décor." [25 THINGS YOU DON'T KNOW ABOUT THE DWARVES]

The Dwarves are celebrating 25 years of mischief with a new collection with songs titles like "The Dwarves Are Still The Best Band Ever", "We Only Came To Get High", and "Happy Birthday Suicide"...

That's right folks, the Dwarves magnum opus is done and set to drop May 10, 2011 on vinyl and cd, both including a free dvd! 25 years in the making the Dwarves Are Born Again features heroes from throughout the Dwarves saga. Blag the Ripper, HeWhoCanNotBeNamed, Rex Everything, the Fresh Prince of Darkness and a cast of thousands including Vadge Moore and Sgt. Saltpeter from the notorious Blood, Guts and Pussy record return to crush the ears of a desperate public.

Stream it below, or with a large amount of their output at their bandcamp. As you may/may not know Dwarves member Rex Everything currently goes by his government name Nick Oliveri (ex-Queens of The Stone Age, Mondo Generator).

The Dwarves have a few dates on the way including an appearance at Punk Rock Bowling in Las Vegas and two NYC dates: July 15th at Knitting Factory and July 16th at The Studio at Webster Hall. Tickets for both the Knitting Factory date and the Studio date go on sale Friday at 10AM. All other Dwarves dates are below. 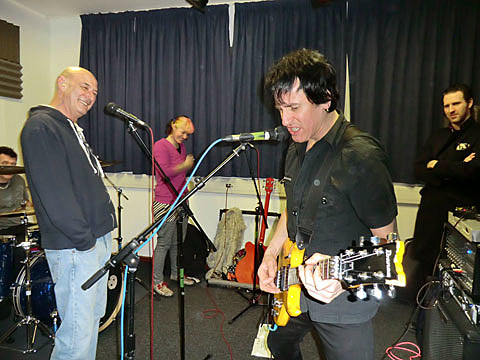 In other news, after a stutter a few weeks ago, TONIGHT (4/20) marks the return of Steve Ignorant to the U.S. to play Crass songs at Europa. Dog That Bites Everyone Thulsa Doom,A.P.P.L.E., and Goldblade open the Brooklyn show... though there is a rumor that Goldblade, who are supporting on the whole tour, may not get here in time for tonight's show due to visa issues (update: rumour confirmed as true) (maybe you caught them at Southpaw in 2003). if not, they will hopefully make it soon though, and definitely in time for the sold-out Santos Party House 'Crass songs' show on 5/8. Tickets for tonight's Europa show are still available, and a full list of Steve Ignorant tour openers is below (Santos has Goldblade, Cult Of Youth and Primitive Weapons).

Speaking Black Flag, two Black Flag vocalists (Henry Rollins & Keith Morris with his band Off!) will share one stage (Terminal 5) as part of a show/tour with Dinosaur Jr. Since that show was announced, Off! also announced even more tour dates which are listed below.

And while we're on the subject, former Misfits vocalist Glenn Danzig heads out on a tour that hits Starland Ballroom in his birth state next month. The current version of the Misfits play Festival For Humanity in Vernon, NJ on May 27th.

In more modern punk news (and other "Off" news), Off With Their Heads will team with Dead To Me for a string of US dates surrounding their appearance at Best Friends Day, including Knitting Factory on August 4th with The Holy Mess and Brian Bruner. Tickets are on sale.

And last and probably least, CJ Ramone will play The Studio at Webster Hall on July 9th, performing "an all Ramones set with Ramones producer Daniel Rey on guitar". Tickets are on sale. Joey Ramone died a little more than 10 years ago, and his birthday will again be celebrated at Irving Plaza in May.

All tour dates and that Dwarves stream is below.