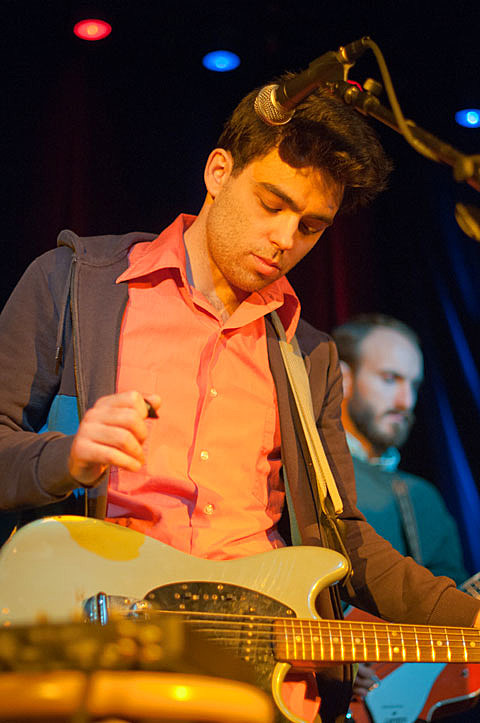 "Evan Voytas is an LA-based singer/multi-instrumentalist. Born in rural Pennsylvania, Evan was raised on the oldies, listening to his father's cassette tapes of Elvis and the Righteous Brothers. As a teenager, he discovered jazz. At age 18, he moved to Harlem where he immersed himself in various religious texts and 70's new age paperbacks. He grew a beard, moved to the desert, moved back, shaved the beard, played lead guitar for a few pop acts, toured the world, moved to a farmhouse on a dirt road in Pennsylvania, started recording music, and finally ended up in Los Angeles.

Since then, Voytas has released a series of self-produced EPs and singles. His latest single, "I Run With You, Spirit Animal," is a 3-minute race through a magical realm. Set to a score of soaring synths, fun guitars, and fake-ass drums, Evan's lyrics typically address "feeling good" or "feeling bad," with underlying mystical themes of the unknown, nature, and outer space." [Evan's official bio]

That's Evan's story straight from his own website, and now that I know the composer and songwriter once lived in NYC (and was born in PA), I hope that means there's a chance he might move back (no offense LA).

I first heard Evan's music not long before CMJ, when I was booking the BrooklynVegan shows. And it didn't take many listens to know I wanted him to play, especially since it might be the only chance I would get to see him... which is exactly what happened.

Evan went on right at 12:15pm at Public Assembly on Saturday, and his undeniably catchy and addictive, falsetto & synth-filled, smooth disco pop jams were the perfect way to start the day (some would classify him as chillwave). His live show was as satisfying experience as listening to him on record - full band included (he has performed solo in the past). If you missed them during CMJ, I'm sure they'll be back soon (but at the moment they have no upcoming dates scheduled).

In the meantime, listen to what Evan has streaming at MySpace, and on his Muxtape. And check out the videos below, and grab the MP3s above, one of which is the brand new "Our Thing". That track appears on Evan's new Tomorrow Night We'll Go Anywhere EP (out now digitally, out physically on November 22). Check it out. To quote The Line of Best Fit, "On first listen, I was transported to a private party where a (slightly) less camp Scissor Sisters were grinding seductively to Purple Rain-era Prince, all whilst Ariel Pink was dropping ketamine in the toilets."

Fun fact: Evan sometimes plays in the backing band of both Flying Lotus and Gonjasufi.

More pictures of Evan performing at the BrooklynVegan/Converse party, and those videos, below... 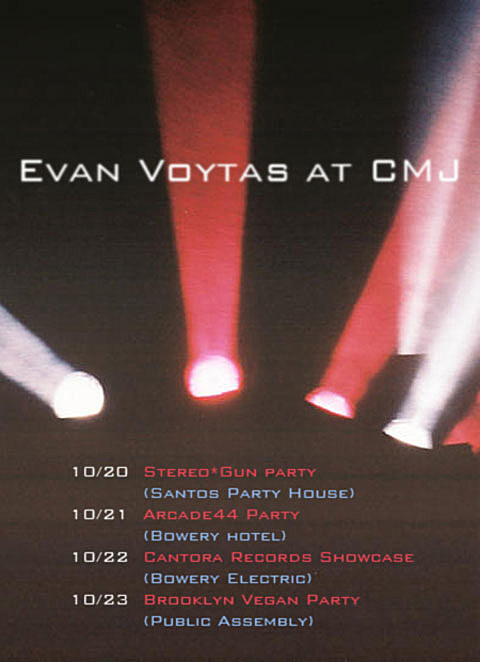 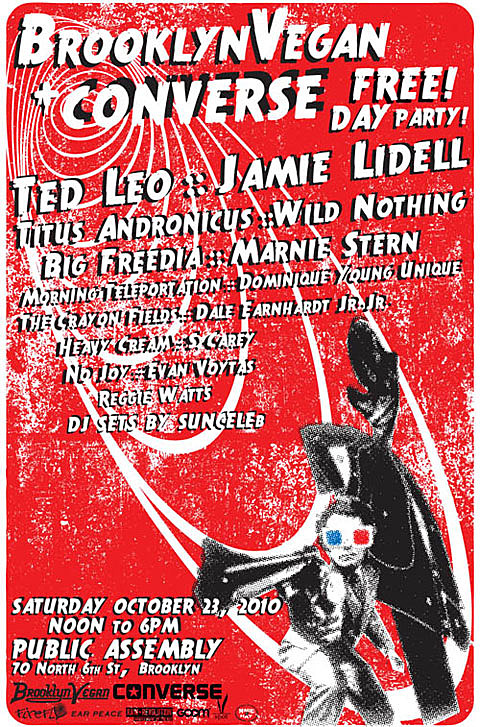 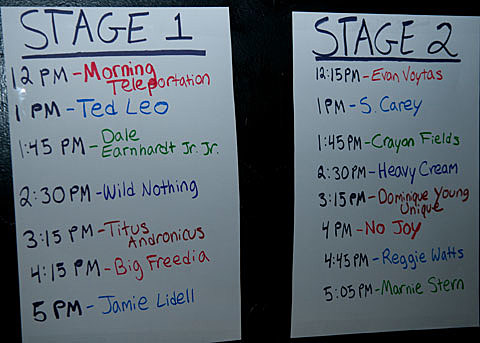 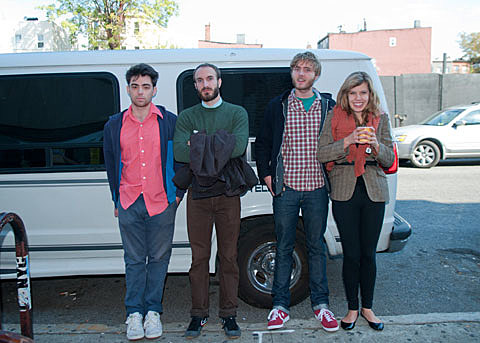 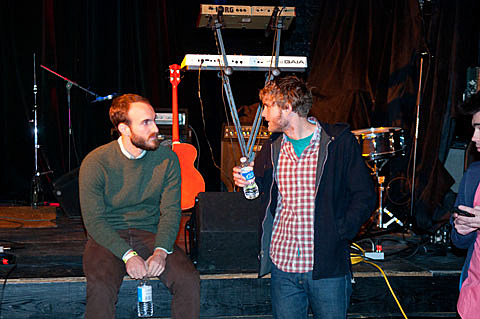 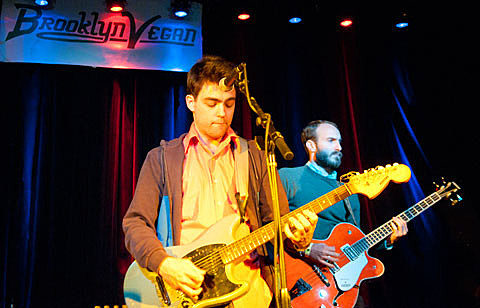 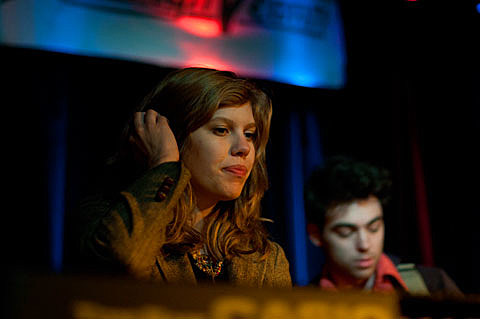 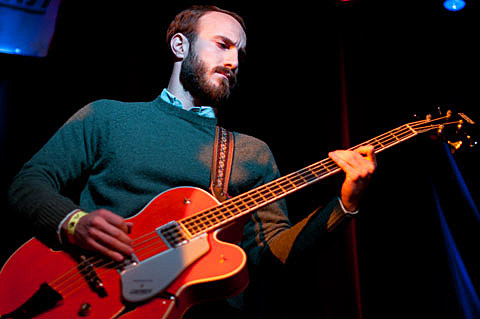 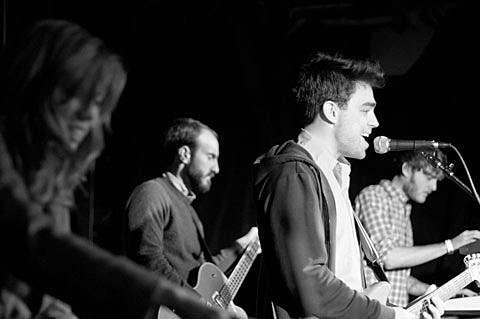 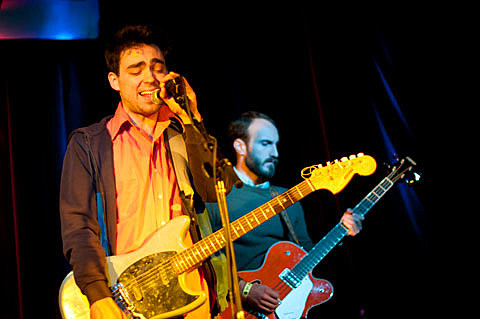 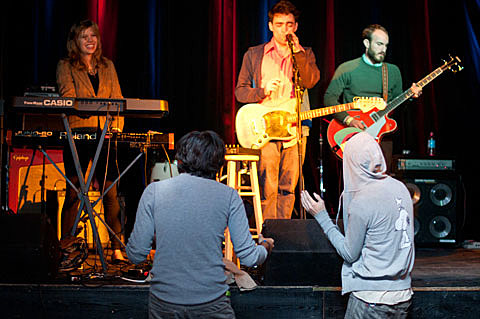 "I Run With You Spirit Animal" video - Evan Voytas

Evan Voytas - I Took a Trip on a Plane