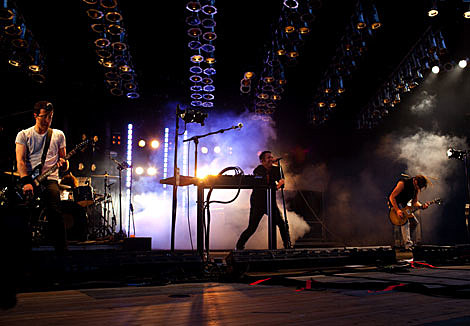 Getting right to the point, we're going to play a handful of shows in NYC, Chicago and LA starting August 22nd. They will be informal affairs in medium to small venues with longer set-lists, possible special guests, cool openers and other surprises. Upon reflection, the NIN/JA tour felt like we had to rush through sets due to a limited allotted set length and many shows were in daylight - it just didn't feel right to end NIN that way. An offer to headline V-Fest in Toronto (being announced soon) set the idea in motion to play some FUN shows to end this up with. If we can get it together we'll film these shows, too.

In NYC we'll be playing Bowery Ballroom, Webster Hall and Terminal 5. In Chicago, the Aragon Ballroom. In LA we'll be at The Wiltern, The Henry Fonda, The Palladium and The Echoplex. These should be cool, unusual and unique shows and I hope you come out - this is it.

So far, The Horrors will be joining us for some shows in NYC, Mew will be with us at other shows in NYC, Chicago and LA, and perhaps more.
Details and ticket info will be announced shortly, so check back.

The Horrors also have a bunch of dates coming up with Crocodiles.

Morrissey did something similar, but it was Bowery Ballroom, Webster Hall, and Carnegie Hall (and Wellmont Theater). Though he just did it to promote a record, not to quit touring. Green Day also just did the Bowery/Webster Hall thing.