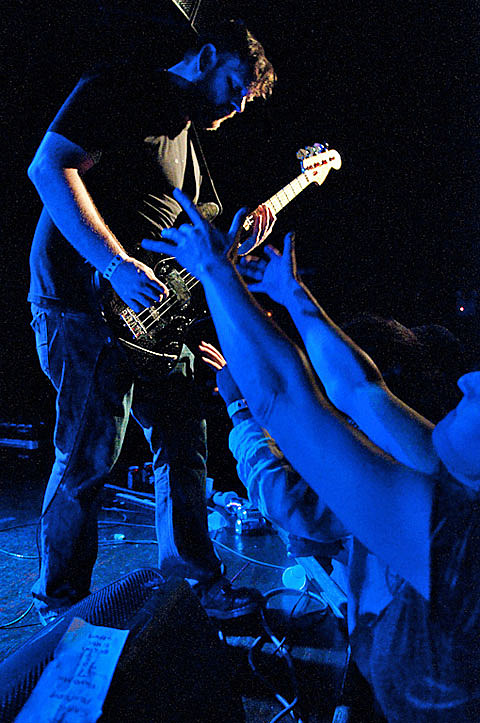 As previously mentioned, Goes Cube will pop champagne with Rosetta, Naam, and The Austerity Program at The Studio at Webster Hall on March 9th (tickets) as part of the In Tides And Drifts LP release party (due March 29th via The End). The old cliche for heavy bands is that the new LP is always "heavier, and more hooky" than the last, but in the case of In Tides & Drifts this is definitely the truth. Check out one of more pummeling moments of early Mastodon-ian thunder in album opener "Safety Coffin", available for download above and streaming below.

We are also happy to report (technically for the 2nd time) that Goes Cube and Kvelertak have been added to the BrooklynVegan/1000Knives stage at Full Metal Texas at Emo's on 3/16, alongside such esteemed folk as Trap Them, All Pigs Must Die, Hull, Rwake, and more TBA. Meanwhile, the lineup on the main stage has blossomed as well, looking a bit like this: Better Left Unsaid, The Word Alive, Elysion Fields and Upon A Burning Body. More details and the flyer below.

The free Emo's show will be brought to you by the fine folks at Bands On A Budget, Dead Conflict Records, Evil Bong 3D, Harpoon Brewery, Sin Cal Industries, and Wacken Open Air in addition to March Is Metal Month, Metal Injection, Metal Insider, MetalSucks, Record Store Day and Put In Mouth.

More details, all Goes Cube dates, the song and some video, below... 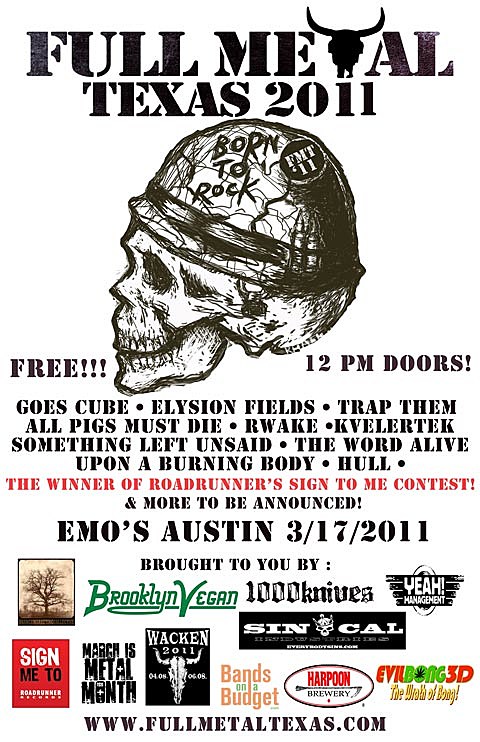 FULL METAL TEXAS IS BACK!
March 17th, 2011 at Emo's Inside and Outside stages

After two wildly successful years, FULL METAL TEXAS is back for a third year of bringing the heavier side of things to Austin during the music festival. This year, Yeah! Management and Branch Marketing Collective have teamed up with Brooklyn Vegan and 1000Knives to bring an even more diverse lineup. The show takes place at Emo's Inside and Outside stages on Thursday, March 17th from Noon til 6pm. 15 bands will tear apart the two stages and the first batch of confirmed acts has been announced:

Plus this year, one lucky unsigned band will get to perform through a contest with signmeto.roadrunnerrecords.com! Details to be announced soon.

As in the past, Full Metal Texas has some amazing partners on board for this year from around the world including:
Bands On A Budget - We Make Merchandising Simple & Affordable (www.bandsonabudget.com)
Dead Conflict Records - Home to best rock releases
Evil Bong 3D - From the creators of Puppetmaster, Evil Bong 3D, opens in theaters across the U.S. on 4/20! (www.evilbong3d.com)
Harpoon Brewery - (www.harpoonbrewery.com)
Sin Cal Industries - Body Jewelry, Piercing, Skate Shop, Decals, Clothing & Accessories (www.everybodysins.com)
Wacken Open Air / ICS Festival Service - The world's largest metal festival taking place Aug 4-6 in Germany (http://www.wacken.com/)

The event is also getting marketing support from March Is Metal Month, Metal Injection, Metal Insider, MetalSucks, Record Store Day and Put In Mouth. Stay tuned for even more band announcements in the coming weeks and get ready to tear apart Austin on March 17th!