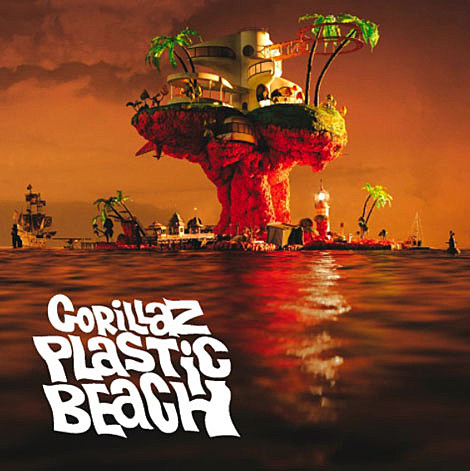 Plastic Beach the new album from Gorillaz, will be released by Virgin on March 9, 2010.

The album is preceded by first single Stylo (featuring Mos Def and Bobby Womack) which will receive its radio broadcast premiere [this week] and will be available for download on January 26.

Confirming "Stylo," Murdoc Niccals twittered, "A leak! A leak! Plastic Beach has sprung a leak! One of those Russian pirates has put a bullet hole in my island! My single's leaked! STYLO!"

Five years on from the release of Demon Days, Murdoc Niccals and co. return with Plastic Beach. The band have taken up residence, recording on a secret floating island deep in the South Pacific, a Plastic Beach HQ, made up of the detritus, debris and washed up remnants of humanity. This Plastic Beach is the furthest point from any landmass on Earth; the most deserted spot on the planet.

The world's biggest animated band, Gorillaz formed in 1998, and have since sold 12 million copies over two albums Gorillaz (2000) andDemon Days (2005). They have hit number 1 in more than a dozen countries and picked up awards including Grammys, Novellos, VMAs and EMAs.

The Gorillaz' return will be marked by a headline appearance at this year's Coachella festival. The Sunday April 18 performance will be the first Gorillaz live spectacle on U.S. soil since the awe-inspiring Demon Days Live run in April 2006 at New York's Apollo Theater.

Coachella tickets are on sale (at 10am PST). Plastic Beach tracklist below...