Pawns @ the space now called Aviv on Halloween 2014 (via) 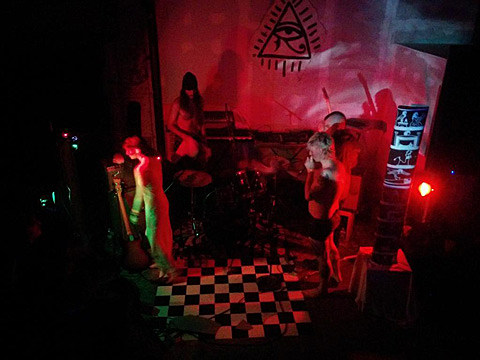 Some of the folks behind now-closed Bushwick venue Emet (and who ran Showpaper for a while) have opened a new place in Greenpoint called Aviv. Located at 496 Morgan Ave, you may have seen a show there on Halloween (it was just called 496 Morgan at the time) with Pop. 1280, Voidvision and Pawns. The all-ages spot has its official Grand Opening on Friday (11/21) with Painted Zeros, Turnip King, Shadow Walker, and Ritual Howls. That's the second-to-last day of Death by Audio -- the circle of DIY venue life.

A couple other shows at Aviv have been announced: Peter Stampfel, The Brooklyn What, the Graveyard Kids, God Tiny, LIAM, and Skinnybones will play "A Funeral for Rock n' Roll" on December 6; and then Sunflower Bean, Larry & Babes, Heeney and Nonsense play December 12. Stay tuned for more details on Aviv, and more shows announced.