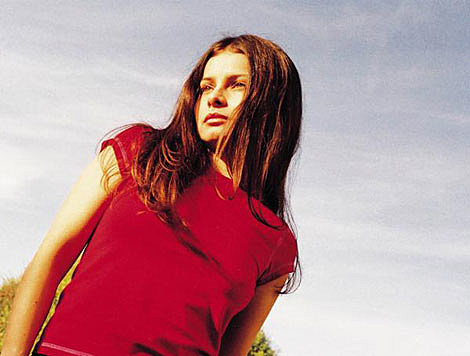 "Since the release of Mazzy Star's debut album She Hangs Brightly, Hope Sandoval has defined the sound and style of California psychedelic dream pop. The world took notice when the breakthrough single "Fade Into You" (from sophomore album So Tonight That I Might See) hit the airwaves and MTV heavy rotation.

Sandoval's trademark vocals helped to make her a modern day music icon. Now the revered singer returns along side My Bloody Valentine's Colm O'Ciosoig to deliver her long awaited sophomore album Through The Devil Softly on September 15.

Over the past decade, the sought after vocalist has collaborated with artists from across the musical landscape: The Jesus & Mary Chain, Air, Death in Vegas, The Chemical Brothers, Massive Attack and Bert Jansch, to count a few.

In 2001, she joined Colm O'Ciosoig to form Hope Sandoval & the Warm Inventions and release their debut Bavarian Fruit Bread. Now on Through The Devil Softly, the definitive star of the Paisley Underground scene reignites her trademark sound in an epic journey across the 11-song album. The project continues the laid-back, slowcore sound they are renowned for and places Sandoval's sensuous, hypnotic voice in the forefront. Recorded in both Northern California and the Wicklow Mountains of Ireland, the spare, subtle arrangements reinforce Sandoval's gentle vocal style.

An extensive North American tour is planned for Fall 09, with dates in the UK and Europe to follow. -[Nettwerk Records]

It was just two months ago when I last stalked Hope. I had no clue at the time that she was coming back so completely. According to the newly redesigned HopeSandoval.com, the shows will be Hope on vocals, glockenspeil, harmonica, and Colm O'Ciosoig on drums. I wonder where they'll play. In 2002 it was two awesome nights at Bowery Ballroom.

Track one from the new album is available for download above.
Full album track list, and some older videos, below...