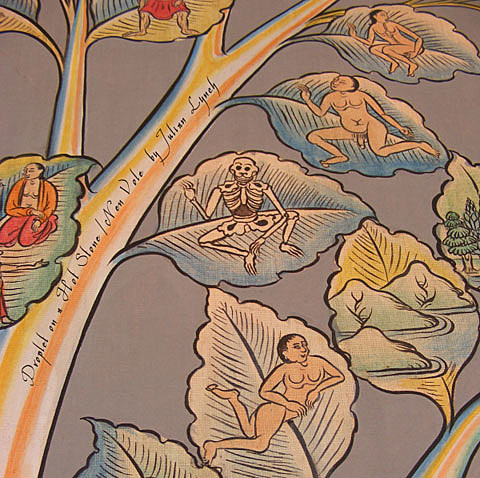 Julian Lynch, [like his friends in Real Estate] is from Ridgewood, New Jersey. The songs featured on this 7" single were originally created for the 2008 album, Born2Run. The recordings contain both acoustic and electric guitar, a drum kit, a keyboard and Julian's voice. Everything was recorded on a TASCAM Portastudio 424. While the initial taping began in Julian's family basement (birthplace of the Alex Bleeker and The Freaks debut), the brunt of the work took place in an empty apartment in Madison, Wisconsin. In a new town with no furniture, Julian recorded the album. [Underwater Peoples]

The "Droplet On A Hot Stone" 7-inch, both sides of which (the melodic lo-fi title track and its lazy-surf Beatlesque b-side) you can get above, comes out June 21st on Underwater Peoples

Julian's second full-length album, Mare, will be out on LP June 28th through Olde English Spelling Bee. You can preview and preorder it at his Bandcamp site.

More info on the Born2Run LP, plus Julian's tour dates (still in the planning stages for this summer) (and which btw do NOT, he tells us, include the probably-not-happening "Mountain Man Fest") and videos are below...

Born2Run was originally made available as a tape by Wild Animal Kingdom Records, in 2009. Julian also produced 75 copies of the album on CD-R. Since it's minimal physical debut, Born2Run has been lovingly featured on countless MP3 Blogs such as Dayvanzombear, Forlorn-Valleys, Bee Boo Bee Bop, A Cassette Cathedral and Prisms of Fame. Julian's music can now be found all across the world wide web, sweet messages often dangle beneath. Julian's second LP, Mare, is coming out on this summer.