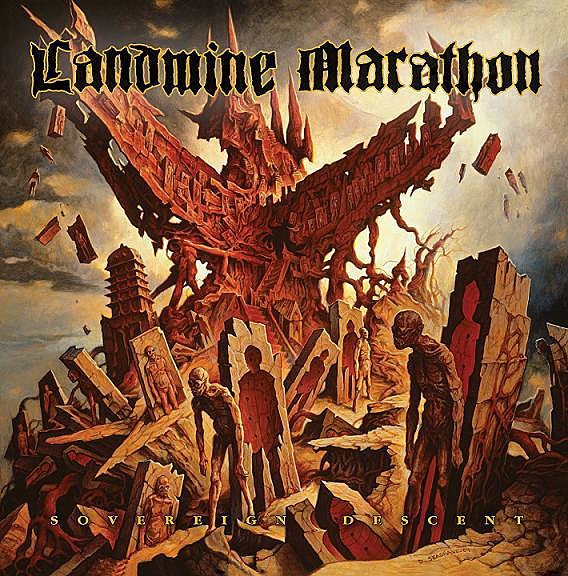 Seeing is believing, and last year I had a revelation. Landmine Marathon laid waste in the basement at Lit Lounge. Booming, vintage Bolt Thrower/Earache style riffs vibrated onlookers, while unhinged vocalist Grace Perry ran circles around the room like a five year-old on a gallon of Red Bull. It was an incredible performance (one of my favorites of the year) and had I attended with Vinny from Jersey Shore, coordinated fist-pumps would have been in order.

Their muscular second LP Rusted Eyes Awake was front and center then, but now the band is happy to introduce their new (maladjusted) baby, Sovereign Descent, due on March 16th. The album is their first LP for Prosthetic, and was produced by guitarist Ryan Butler with mastering by Alan Douches. The nine track LP is a burner, another set of brutal old-school death metal with a modern twist - more punishing riffs with more hooks perfomed with ferocity. Exhibit A is the album opener "Exist", available for download above in edited form. Pre-order the LP at Prosthetic.

Landmine Marathon begins its next live campaign of riffs/beatdowns in Arizona on March 6th, continuing on to an appearance in Columbus, Ohio for Scion Rock Fest, and eventually scooting all the way down to SXSW for a string of dates TBD. Until then, for more information and updates check back here or join the Landmine Blogathon.

Full tour dates and a few videos are below...