Laurie w/ the dogs in Australia (more by Roberta W.B.) 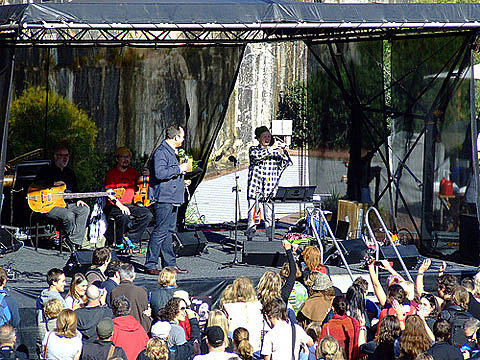 Some in the audience howled with glee, others stood on trembling legs and a few drooled in delight as famed performance artist Laurie Anderson debuted her original "Music for Dogs" composition outside the Sydney Opera House on Saturday [June 5th].

Hundreds of dogs and their owners bounced around as Anderson entertained them with 20 minutes of thumping beats, whale calls, whistles and a few high-pitched electronic sounds imperceptible to human ears.

"Let's hear it from the medium dogs!" Anderson called out from the stage, as a few dogs yipped in return. "You can do better than that -- come on mediums! Whoo! WHOOOOOO!"

The concert was originally billed as a performance for dogs' ears only, and was going to be largely limited to electronic noises played at a frequency too high for human ears. But Anderson changed things up when she decided she wanted people to have some fun, too.

"We didn't want to do something that humans couldn't hear," she said. "We brought the octaves down into our hearing range so we could all have the experience." [AP]

Laurie Anderson will be performing her new work Delusion this fall at BAM as part of the Next Wave Festival. That show will go on tour as well.

Before then, Laurie's new record, Homeland, comes out June 22nd on Nonesuch. It's streaming in full at NPR (up till the release date) - check it out. She'll play songs from that album on a very short tour this July. Stops include on-air sets at World Cafe Live and Late Show with David Letterman, and a Tuesday, July 13th show at (Le) Poisson Rouge. Tickets are on sale.

The album has some alright guests (including Laurie's male alter-ego Fenway Bergamot)...

Beyond those projects, "Anderson is also preparing a major retrospective of her visual work that will open in Sao Paolo in August 2010 and a book of her stories that will be published in 2011."

Videos from the "Music for Dogs" performance and tour dates are below...

music for dogs - intro by laurie