Lord Mantis at Saint Vitus in 2012 (more by Fred Pessaro) 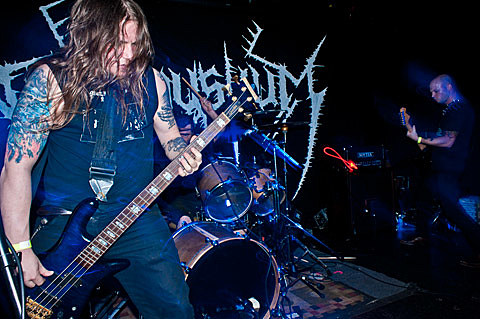 Lord Mantis just debuted a new song on Stereogum called "Negative Birth" from their forthcoming album, Death Mask, which comes out on April 29 on Profound Lore. The song, a big sludgy monster, features Dylan O'Toole of Indian on vocals--Indian also recently released their own filthy slab of sludge, From All Purity. Stream "Negative Birth" below.

As mentioned in Heavy Lowdown, Lord Mantis joined the Martyrdoom lineup along with Evoken after Knelt Rote dropped off the bill. In other lineup news, Sein Und Zeit has been moved to the Sunday billing. Full day-by-day lineups below--if you're around, this is a great way to catch a bunch of rare appearances by killer black metal bands including Sargeist, Behexen, Forteresse and many more, not to mention the fest's doom headliner, Mournful Congregation. Sargeist recently premiered the title track from the band's forthcoming album Feeding the Crawling Shadows, and Forteresse streamed a new track, too. Tickets to Martyrdoom, which runs from June 27-July 1 at Saint Vitus in Brooklyn, are on sale.

In other Martyrdoom news, the festival will have a Metal Flea Market at Saint Vitus during the days of June 28th and June 29th, with vendors like The Omega Order, Broken Limbs, and Fallen Empire Records. More vendors and info on that on the event's Facebook page. Fallen Empire Records, one of the premiere underground black metal labels in the US, just appeared on the Invisible Oranges on East Village Radio show and premiered new material from Vorde, Lluvia, Death Fortress, Haethen and In the Court of a Broken Flesh. Check out the playlist and stream over on IO. 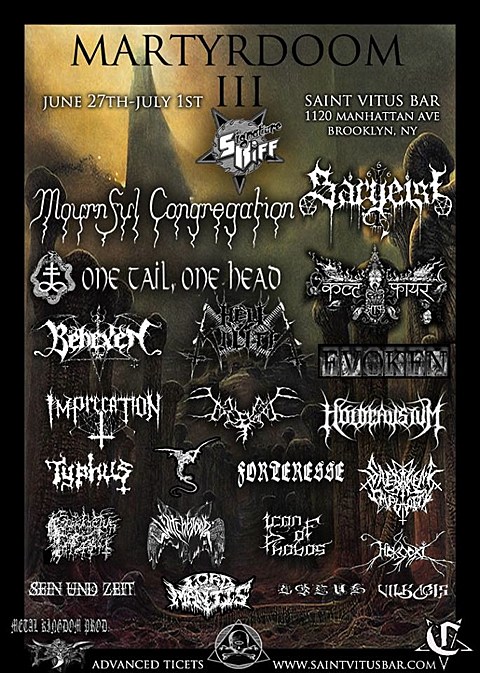