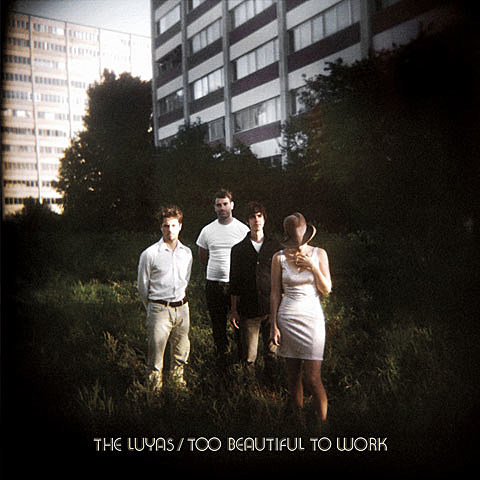 Given the falling temperatures and the looming work week, it would have been tempting to stay in last Sunday (12/5)... if it wasn't for the solid bill at Glasslands. Up first was Little Anchor, a band so young that their Myspace page just hit 3000 page views. The Brooklyn four-piece makes sweet, largely acoustic songs that range from quiet to quieter, depending on whether vocalist Alexa Cabellon is playing a buoyant line on keyboard or softly plucking out a delicate melody on guitar. Their material may be a bit mellow for a Friday night show, but it was fitting for a Sunday.

Next up was the otherworldly [2008 buzz] act Twi (rhymes with 'why') the Humble Feather, who you also may have caught at 92Y Tribeca with Julianna Barwick a couple of weeks earlier. The set-up was simple: just two men, each toting a well-worn acoustic guitar and sharing vocal duties. The band's website mentions "a mythical interstellar traveler," but the duo never referenced this inventive back story during their show, leaving audience members to form their own impressions from the odd, experimental (often wordless) vocals and subtle finger pickings. Their performance may not be very compelling visually, but it is no less mesmerizing.

After a quick succession of mellow acts, the energy in the room picked up significantly when The Luyas' began to play, thanks in large part to vocalist/guitarist Jessie Stein's zeal. The crowd had been hanging back a bit for the first two bands, but at Stein's request, they moved in closer to the stage almost instantaneously. Having established a closer connection to the audience, Stein turned to her bandmates. "Ready boys?"

From the very first song, a single light bulb on Stein's mic stand made her child-like delight all the more apparent, but don't let her sweet demeanor fool you. The girl is fierce when she pulls out her electric guitar and cranks it up.

Stein warned the crowd early in the show that the band had been through its fair share of hardships during the tour. Apparently things were constantly breaking. First it was just an amp or two - no big deal, but on Saturday night, a drunk driver drove into their car (no one was hurt). As if to prove her point, she bumped one of the light bulb contraptions on her way to the Wurlitzer, sending it crashing to the ground. "I told you, this is the tour where everything breaks!" She joked.

For their grand finale, "Here's to You," Stein had all of the stage lights turned off, but the band didn't play in the darkness for long. The slow, melodic intro soon gave way to more chaotic instrumental arrangements and a jarring sensory experience as the strategically placed light bulbs and semi-hidden overhead lights rapidly flickered on and off, casting quick flashes of light onto the venue's trademark tissue paper sculpture ceiling.

What began as the bedroom project of Brenda Malvini in the summer of 2009 has nicely evolved into group effort of North Highlands. Given Malvini's history of small, intimate house shows, it makes sense that North Highlands' New York shows are often populated by a dedicated fan base, but I was still surprised to witness the intensity of their fervor. From the first few songs, the audience danced around, energetically - not bad for a Sunday night in December at midnight. Of course, it helped that Malvini, herself, couldn't stop dancing around the stage. As a gesture of gratitude for their dedication, Malvini even threw free koozies into the crowd, each emblazoned with the band name. "We have presents for you! You have to catch it! They don't hurt. Don't be afraid," she said playfully.

It was their last show of 2010 and a good night for them to go out on. For their final song, the dance floor had all the energy of a mosh pit without the bruises. People were clapping with joy and jumping up and down in time to the music as Malvini repeated the song's infectious tag line: "We don't care any more." During the last minute of the song, Malvini began to grab audience members to join the band on stage. First it was just a couple of people, but soon five eager fans crammed onto the already tight platform to dance in the spotlight before the band called it a night.

The Luyas' debut album Too Beautiful To Work will be released February 22nd via Dead Oceans (cover art above). They have a new video for the song "Tiny Head (which you can dowload above). Watch it below...

Tiny Head by The Luyas from Secretly Jag on Vimeo.