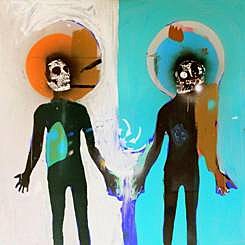 "Legendary trip-hop duo Massive Attack have announced the release of their first new material in three years - an EP of four new tracks due for release on October 6th from Virgin Records. The lead song "Splitting The Atom" features Robert Del Naja (3D), Grant Marshall (Daddy G) and Horace Andy, while TV On The Radio frontman Tunde Adebimpe guests on "Pray For Rain". The EP also has remixes of two new tracks; "Psyche" featuring Martina Topley-Bird is given the re-rub by Van Rivers & The Subliminal Kid who have recently remixed Bat For Lashes and The Big Pink, while the Guy Garvey fronted "Bulletproof Love" is stripped back to a minimalist reworking by Christoff Berg, who alongside Van Rivers & The Subliminal Kid produced the Fever Ray eponymous album.

Over the last three years Robert Del Naja has written and produced soundtracks for a number of films and documentaries, including 'Trouble In The Water', '44 Inch Chest', 'In Prison My Whole Life' and 'Gamorra', the latter for which he won the David Di Donatello Award for Best Song. Earlier this year, Massive Attack won the Outstanding Contribution to British Music Award at the Ivor Novello Awards. Massive Attack will headline this year's Bestival on Friday, September 11th ahead of their first full UK tour in three years that begins on September 17th in London."

In related news, Hope Sandoval has a new Warm Inventions album and is touring, and says Mazzy Star will be back.