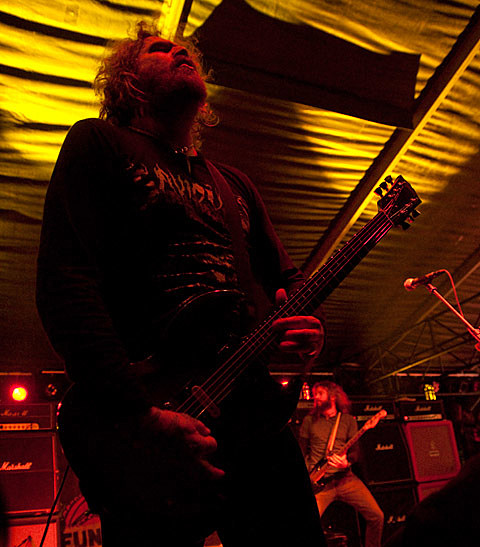 A new song called "Black Tongue" has made its way onto the interwebs from Mastodon's new/forthcoming LP The Hunter. Stream said track below.

Mastodon's only currently announced tour date goes down on 7/30 at the Gorge Amphitheatre in Gorge, WA with Soundgarden, Queens of The Stone Age, and Meat Puppets.

In semi-related news, ex-QOTSA member Nick Oliveri's run-in with the law never stopped Kyuss Lives from touring. According to the band, "TMZ blew this way out of proportion, nobody got hurt and any of that other bullshit." They played Belgium with Nick like one day after the incident (but not with Mastodon collaborator and QOTSA member Josh Homme who is not part of the Kyuss reunion). That said, nobody denied the arrest or S.W.A.T. team involvement.

Tickets are still on sale for the Terminal 5 show with the Sword. More dates HERE. New Mastodon song below...