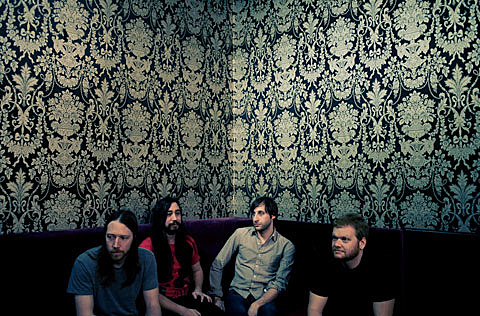 There was a time when "prog" was short for progressive, as in furthering an idea... in this case, a theme or a riff. Nowadays the name "prog" can just be slapped on any band that wants to riff for 30 minutes, which just makes "prog" a synonym for "boring". Brooklyn's Titan specializes in the right kind of prog that builds and evolves upon their heavy guitar and keyboard riffs without seeming like a crew of musicians freshly out of music class ("Hey Mom! Look at this uber-complex scale I can play!")

Titan recently signed to Relapse Records, and will release their new LP Sweet Dreams via the label on 10/12. The LP was recorded at Translator Audio in Brooklyn with Brendan Tobin (of Made Out of Babies), and is the first to feature ivory-tickler extraordinaire (and Maserati member) Steve Moore on bass and synth. Dig on the third burner "Wooded Altar Beyond The Wander" above and preorder the LP or CD.

The band will celebrate the release of Sweet Dreams with a pair of shows in Philadelphia and NYC, with Union Pool on 10/24 getting the nod and support coming from some serious badasses in Royal Thunder and Dark Vibes. Ticket info is forthcoming.

Atlanta badasses Royal Thunder recently signed with the label as well, and will re-release their debut EP via the label. The x-track EP will see a re-release on LP and CD in November, and will feature "Mouth of Fire" available for download above.

Titan dates, as well as some recent Royal Thunder videos, is below...