photo: replica of a Sam Goody, where people used to buy albums on Tuesdays (more) 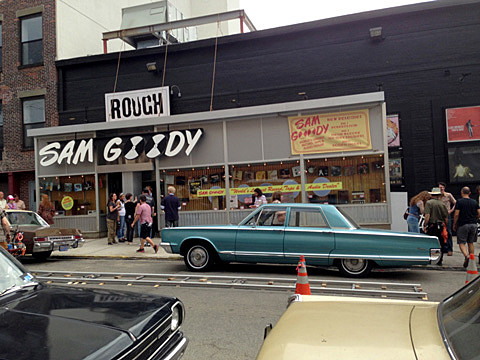 As you may know, the worldwide album release day will now be Friday, rather than the previous system where albums came out on Tuesdays in the US, Mondays in the UK, and other days in other countries. And as you may have noticed in some of our posts this week (like Ghostface Killah, Spraynard, or Upcoming Metal Releases), that comes into effect this Friday, July 10.

We all know of course that "release day" doesn't really apply to all records, and most can be heard one way or another before that day anyway. Most major releases usually stream a week beforehand (whether it's on Soundcloud, Bandcamp, NPR, iTunes Radio, Spotify or some other platform). Independent bands will continue to throw their albums up on Bandcamp on any day they want, as they've always done. Kanye West and Drake will still throw new albums on iTunes at 11:47 PM on a Wednesday without prior warning, and Jay-Z will probably do so on Tidal.

On the other hand, if you're used to checking Spotify, Rdio, or the iTunes store for new releases every Tuesday, you probably felt the change already when no new albums were there for you earlier this week. And now you won't have to worry about something like an album being out in Iceland but not available in the US yet.

Or maybe Noel Gallagher will release his "on a Wednesday just to be fucking contrary"...