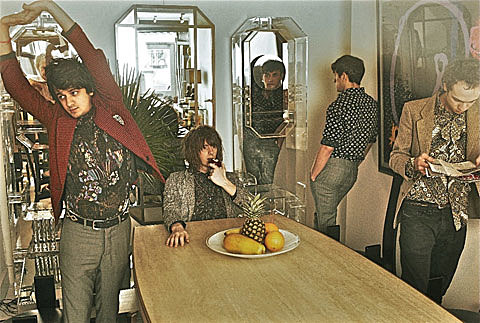 Eel Pie Island residents Mystery Jets are back with a new label, a new album, and two NYC dates at Mercury Lounge this September. They play Tuesday, September 14 and Wednesday, September 15. Both shows are on sale now. There's also an L.A. show at the Troubadour on September 17. Look for a proper North American tour later in the fall.

Mystery Jets' third LP, Serotonin, is out July 13 on Rough Trade. While there's nothing quite as perfect as "Young Love" from their 2008 album Twenty One, this is a better, more coherent record overall with no shortage of stick-in-your-head songs. It's a little less '80s crazy (no Whitney Houston sax this time) with guitars playing a stronger role. The album was produced by studio veteran Chris Thomas, whose credits include Roxy Music's Siren, Never Mind the Bullocks, the first two Pretenders LPs, Pulp's This is Hardcore and U2's How to Dismantle an Atomic Bomb.

You can download "Flash a Hungry Smile"  and the album's fizzy first single, "Dreaming of Another World," at the top of this post. Be sure to check out the latter's gorgeously-shot video at the bottom of this post. If the actual song is on the new wave side, the video for "Dreaming of Another World" is decidedly nouvelle vague. Both songs feature nimble-fingered guitarist Will Rees on lead vocals, who is definitely taking more of a prominent role in the band this time. He shares the mike just about equally with Blaine Harrison who tends to sing on the album's more anthemic tracks. Twenty One, one of my favorite albums of 2008, didn't even get released in America. Hopefully they'll get a better push this time out.

All Mystery Jets 2010 tour dates are below with the new album art, plus that video for "Dreaming of Another World" is below, as well as video of a couple Serotonin songs performed live in a "grand house by the River Thames in Hammersmith, London."... 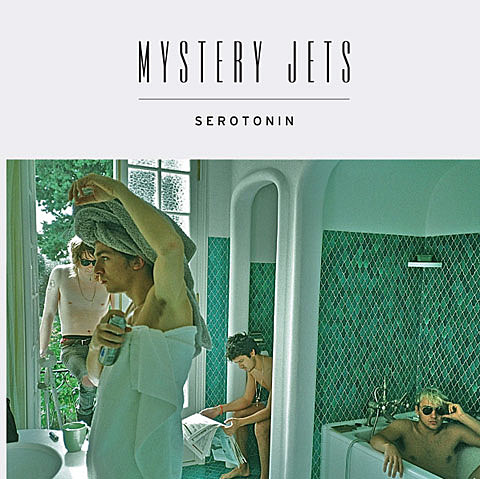 Mystery Jets - Dreaming of Another World