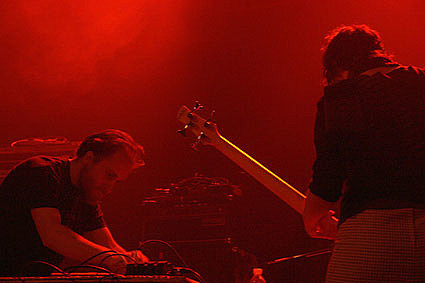 Experimental doom/droners Nadja will celebrate the re-release of amazingly badass "Skin Turns to Glass" (cop it April 1 via The End, sample "Sandskin" here) tonight (March 7th) with a show at Europa in Brooklyn - a show that is also celebrating the NWOBHM (that stands for New Wave of BROOKLYN -not British- Heavy Metal, nyc-ers). Special guests include the mighty Bloody Panda, Tombs (who have a new song and are playing Europa again in May), Tournament (playing with Trap Them), as well as And This Army....

Tickets are still on sale and only $6! The show is part of a greater tour, which includes dates at SXSW with Made Out Of Babies, Giant, and Jarboe. More on Nadja here.

Speaking of Jarboe, scoot on over to Metalkult for a multi-part video interview with the ex-Swan as she reveals details on her frightening new EP collaboration with Justin Broadrick called J2. She spills the beans on her time as a sex worker, being a woman in extreme music, and her new record which includes guest appearances by Phil Anselmo, Attila Csihar (Mayhem), Josh Graham and many unnamed others!!!

Some live Nadja video below...