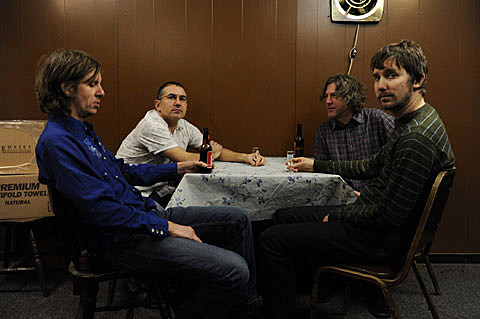 As we told you already, Brooklyn's own Obits release their second album, Moody, Standard and Poor on Sub Pop on March 29. This sophomore disc finds the group expanding their palette with strings, hints of electronica, and Burundi drumming. Ok, not really. It's Obits. It's another fiery chunk of rock n' roll, 12 new songs, in and out in 36 minutes. The wry Sub Pop press release says that this album isn't "yelly" and maybe Rick Froberg "sings" a little more, but there is no signs of mellowing here. Check out kick-ass single "You Gotta Lose" at the top of this post. Also be sure to check out the video for it is at the bottom of this post, along with a download widget to get your mitts on a second Obits track -- the Sohrab Habbibion sung "Shift Operator."

As you do when you have a new record out, Obits are going on tour which includes -- surprise! -- stops in Austin for SXSW. I am super psyched to let you know that Obits will be playing the free BrooklynVegan day party at Barbarella on Thursday (3/17). Details, like who else is playing will be announced soon, but fans of Gentleman Jesse & His Men might want to show up to this one too.

Obits are also playing the official Sub Pop / Hardly Art SXSW showcase which happens Friday, March 18 at Red 7 which also features J Mascis, Dum Dum Girls, The Head & the Heart, Papercuts, La Sera, Hunx & His Punx, Fergus & Geronimo and more. Before hitting Austin, Obits will have a few dates with labelmates Jaill who are also playing the Sub Pop showcase. After SXSW, the band will head back up the East Coast, culminating in the April 2 record release show for Moody, Standard and Poor at The Bell House.

All tour dates, plus the "You Gotta Lose" video and that download widget, are below.

Obits - You Gotta Lose from Obits on Vimeo.