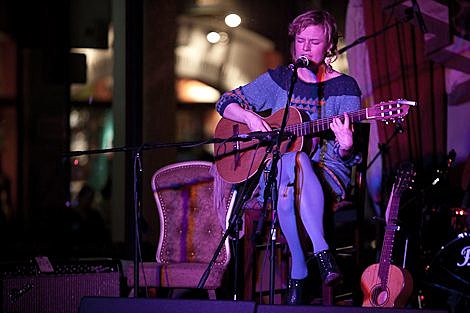 Talented Icelandic songwriter Olof Arnalds has an amazing new record, Innundir skinni (translation: Under the Skin), coming out September 14th on One Little Indian. The album's title track, an acoustic-guitar-and-voice ballad produced (as the whole album is) by Kjartan Sveinsson of Sigur Ros, is posted above. That song will also appear on a forthcoming 7" single featuring Arthur Russell's "Close My Eyes" on the b-side. An intimate performance of that cover is below.

Olof in NYC for a show at Rockwood Music Hall tonight (July 19th) where she'll be accompanied by Skuli Sverrisson (Laurie Anderson's musical director) on electric bass. Tickets are still on sale. After that she travels to the West Coast for shows with Jonathan Richman.

Bjork make a guest appearance on an Innundir skinni song. She'll also pop up on the new Antony and the Johnsons album, Swanlights, due in October. There she sings on a duet called "Flétta" (the Icelandic word for both braid and lichen). Bjork recently put out a collaboration with Dirty Projectors, and will be holding a press conference today (7/19) to protest a new deal that would give Magma Energy of Canada a 65 year lease (renewable for 65 more) on Iceland's geothermal power. She said to the Financial Times about the it:

"Most people feel this is something the nation should keep....Especially after the bank crash, after witnessing all the criminal gambling with precious things... This deal smells like the leftovers from the corruption that brought us the bank crash."