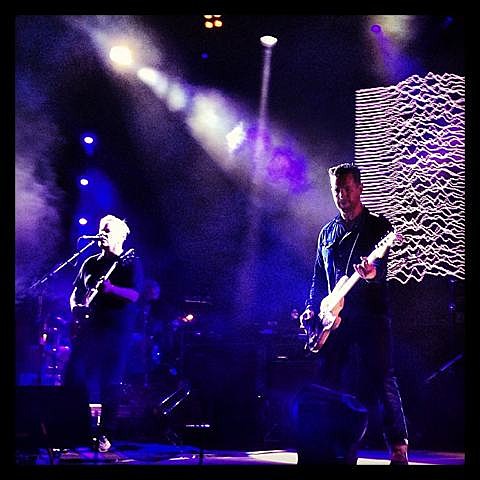 Sometimes even the most familiar songs have the ability to transfix. New Order's "Blue Monday" is their most famous song, which remains the biggest-selling 12" single of all time, and has been released in various forms a handfull of times. It is a song I don't think I need to ever hear again and, yet, last night (7/24) at Williamsburg Park, near the end of the song when the arpeggiated guitar lines begin weaving their way in, I heard something new. The perfect weather and good vibes crowd may have had something to do with it, too.

I've seen New Order a few times over the years, including a couple times with the original line-up. While bassist Peter Hook's presence is missed -- his playing style can be emulated, but his rocker look and low-slung bass are nearly as iconic -- it kinda seemed clear that the other members of the band don't feel that way. Despite Bernard Summer playing on a broken leg (no crutches though), they definitely seemed to be having more fun than the couple times I've seen them since they reactivated in 2000 and this was easily the most hit-filled set I've ever seen them do.

Hook's acrimonious departure and Gillian Gilbert's return to the live band (mostly keyboards) also has brought back a little more of the dancier numbers to the setlist. Last night we got "World" from Republic (which doesn't really feature much Hook-style bass, a point of contention at the time), and revamped versions of Power, Corruption & Lies' "5 8 6" and Joy Division's "Isolation," the latter of which was made into a housey dance anthem (which I thought worked pretty well).

There were also classics like "Ceremony," "Age of Consent," "Your Silent Face," "Love Vigilantes," "Bizzare Love Triangle" and more. The three-song encore was all Joy Division, ending with "Love Will Tear Us Apart" that also got a bit of a rework, with the keyboard line downplayed in favor of a more guitar pop arrangement. Personally, I could've done without any Joy Division songs and had more New Order, if it had meant getting maybe "Thieves Like Us," and a couple from Technique which they skipped entirely.

On the downside, for a band that is known for having some of the most amazing sleeve designs of the last 30 years, last night's show featured maybe the worst projections I've ever seen at a concert, some of which looked like '90s-era screensavers. During "Here to Stay" there was a vector graphics image of a keyboard's "CTRL" key floating around and 3-D imaged lyrics on screen. If there's one thing New Order don't need, it's attention called to their lyrics. While the images may have originated from designer Peter Saville (and some of their videos), the execution was a little distracting at times. Of course this is also a band whose singer played in a silver metallic Joy Division shirt. You could always just dance with your eyes closed.

Apart from that, I had a blast and so did the crowd at Williamsburg Park who were singing along through most of it. Which was good, as Sumner forgot the lyrics and came in at the wrong time more than once. Drummer Stephen Morris, however, remains an insanely accurate human drum machine, hammering away 16th notes for most of the show's 100-minute length.

Opening the show, the most packed Williamsburg Park show since the venue opened, were Holy Ghost! who are pretty openly New Order devotees (their video for "I Will Come Back" is basically a shot-for-shot remake of New Order's "Confusion"), especially that '83-'84 period when they were working with Arthur Baker. The band were six strong last night, including one guy whose job seemed to be controlling the massive racks of modular synths they brought with them. A nice lead-in to the evening.

Pictures from the show are coming later. Meanwhile, you can check out New Order's setlist, below.