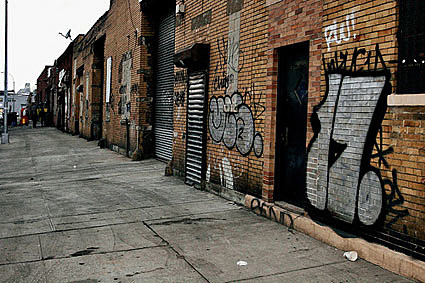 according to a couple of sources, 7th street between 2nd and 3rd aves will soon be home to a new musical venue run by the good folks at union hall. given the problems that i've heard about with their current location - i.e. noise complaints, it makes sense to open something in a location where noise is not an issue. additionally moving the music aspect of their business down the street opens up the basement for quieter activities such as the brilliantly booked sunday night comedy shows. [the food of the future] (via)

I hope what "food of the future" is implying (that the new venue would replace the music shows currently going on at Union Hall) isn't true. 7th St & 2nd Ave is about as convenient as the Hook was (okay, not THAT bad - not even close). Anyway, I don't think the noise complaints against Union Hall have anything to do with what's going on in the basement. I even bet that the people going to shows are quieter than the regular upstairs bar crowd. Here's hoping that (assuming this new place really even exists) they have music at both.

UPDATE 1: A better description for this neighborhood might be near-Park Slope, or just Gowanus.

UPDATE 2: Anonymous reports, "The venue would be in addition to Union Hall. It would be more of a music venue...as opposed to a bar with bands downstairs. There would still be music at Union Hall."