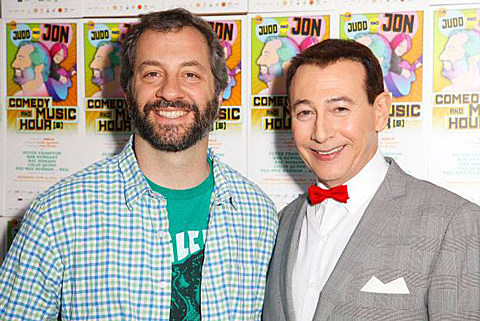 Pee-wee Herman's long-discussed return to feature film is finally happening, with a new movie, Pee-wee's Big Holiday, to start filming in March. It will premiere not in theaters but on Netflix. Here's the gist: "a fateful meeting with a mysterious stranger inspires Pee-Wee Herman to take his first-ever holiday in this epic story of friendship and destiny." The film was cowritten by Paul Reubens (Pw's alter-ego) and Paul Rust, and is being produced by Judd Apatow who says:

As a fan of Pee-wee Herman since he first appeared on The Dating Game, I am thrilled to have the opportunity to work with the brilliant Paul Reubens on this film. It is a dream come true.

Directing the film is Wonder Showzen co-creator John Lee who we interviewed last year and who lately has directed episodes of Broad City and Inside Amy Schumer. The idea of the guy behind Wonder Showzen (one of the most twisted things to ever air on commercial television) making the new Pee-wee Herman movie, on paper at least, sounds like a very good thing.