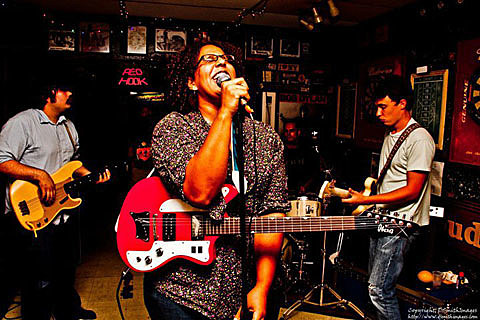 Extremely talented Athens, Alabama modern soul and rock band Alabama Shakes seemed to come out of nowhwere. It was less than two months ago that the young band came to NYC to play a few random CMJ shows and then announced they would return to NYC to play an early show at Mercury Lounge. That show, which was last night (12/9), didn't even sell out that quickly, though it did eventually sell out in advance which prompted the addition of a much larger Thursday night (12/8) Brooklyn Bowl show which nobody could believe ALSO SOLD OUT IN ADVANCE. Chicago and LA shows are also sold out.

Next time the overnight success comes back to NYC will probably be with headlining shows at Bowery Ballroom and Music Hall of Williamsburg, so if you're curious at all, you may want to check their just-announced gig at Lakeside Lounge in NYC tonight (12/10).

Though I'm probably never going to personally throw on an Alabama Shakes record, I was curious enough to go see them at Brooklyn Bowl and I was definitely blown away by the talent and smiles on stage, and the seemingly pure place it came from, especially from frontwoman Brittany Howard...

"This is what the saga of a breaking band can look like in the age of the constantly plugged-in, accelerated news cycle. In the case of The Alabama Shakes, there really is something beneath the hype that people are viscerally responding to. Aquarium Drunkard called it "a slice of the real" -- as opposed to stuff that's "fake" and "pre-packaged." NPR music critic Ann Powers noted the pre-packaging inherent in retro soul, but pointed to Howard's artistic self-determination, describing the 22-year-old singer as "a young woman living in the now, wrapping her arms around a tradition without letting it carry her away." New York Times music critic Jon Pareles celebrated the contrast between The Shakes and the typical CMJ buzz band -- one that's "built around some cool-headed concept involving noise or irony or ambiguities or primitivism." [Nashville Scene]

Listen to the EP at Bandcamp. More tour dates below...