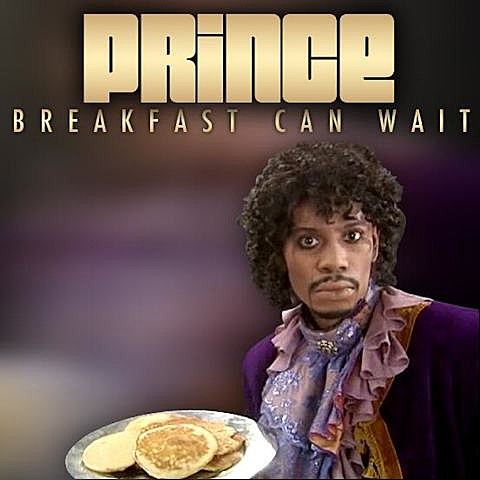 It's "Purple Week" at City Winery which is a more colorful way of acknowledging that Prince's sometimes backing band, New Power Generation, will be playing six shows at the venue this week starting tonight (8/21) with two shows and continuing Thursday (8/22) with early and late shows, and then late shows only on Friday (8/23) and Sunday (8/25). City Winery is promising "special celebrity guests nightly" and also note the 8/25 show is a VMAs afterparty. That potential for music royalty may justify the pricey tickets -- which are still available to all shows.

In more specifically Purple One news, Prince has been pretty actively lately with his new band, 3rd Eye Girl ("4 hard-rocking, soft-spoken, astral traveling explosions of awesome"), having just wrapped up a North American tour that found him often playing two shows in a night, and releasing a string of new singles via his website. The latest being single "Breakfast Can Wait" a big slice of funk that's really pretty good, especially for an artist four decades into his career. The cover art, featuring Dave Chappelle and some sketchy Photoshop work (above), was revealed last week via the Prince 3rd Eye Girl twitter which apparently Mr. Nelson himself started using last week, mainly for posting videos, but also food. Self promotion and pics of food -- a week in and he's already a pro.

Prince's "Breakfast Can Wait" and "Groovy Potential" streams below.