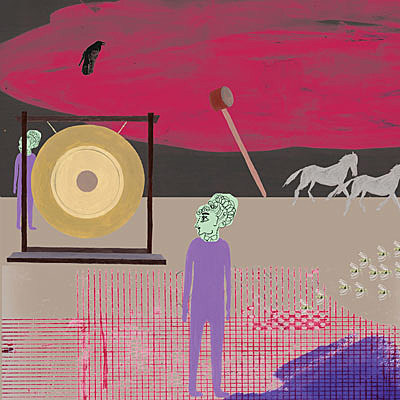 Kill Rock Stars will be releasing the new album from Portland darlings Quasi on February 23, 2010. American Gong (cover art above) was recorded at Jackpot Studios by Kendra Lynn and was mixed by Steve Fisk (Unwound, Sleater-Kinney, Shoplifting) This is Quasi's first studio album since 2006's When The Going Gets Dark and first for Kill Rock Stars.

Quasi formed in Portland, Ore., in 1993, which means that it's been fearlessly rocking since long before your website launched or you booted up an iPod. For years -- 16 to be exact -- it was a duo consisting of Sam Coomes and Janet Weiss. In 2006, Joanna Bolme (of Stephen Malkmus + The Jicks) joined the band on bass.

Kill Rock Stars is offering the above song from the album for a free download. They also just released a 20-song label sampler on iTunes.

Quasi doesn't have any NYC dates yet, but they're touring in February (Japan) and March (North America) which is when they will pass through Austin for SXSW. All dates below...