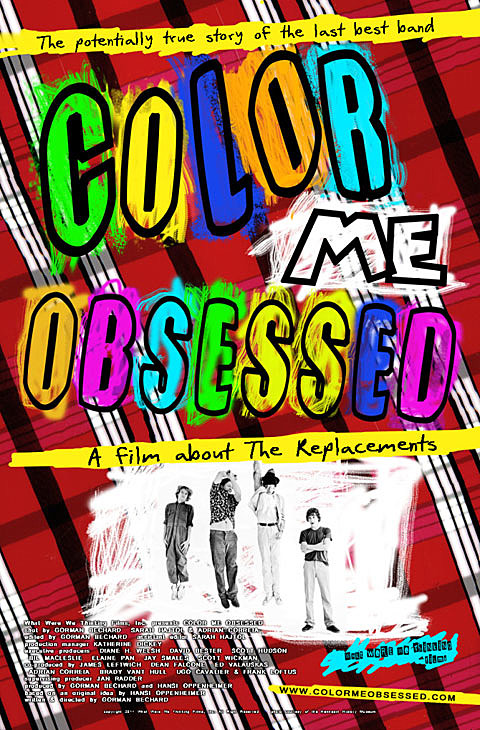 Color Me Obsessed, a film about The Replacements, will be screening at a number of film festivals and other venues this year and next year. The film was produced by Gorman Bechard (of What We Were Thinking Films) and features interviews with Colin Meloy of The Decemberists, Craig Finn of The Hold Steady, Tommy Ramone, members of Husker Du, Robert Christgau, Jim Derogatis, Ira Robbins, Tom Arnold, and others. The film will premiere in NYC on November 16 and 17 at Bowery Electric.

We're excited to announce that, along with Bowery Electric, we're presenting MATS CITY, a Replacements tribute show that will take place at Bowery Electric after each screening. The show, which will be hosted by Matt Pinfield features a number of guests including Brian Fallon (Gaslight Anthem), Jesse Malin, Steve Wynn, Ted Leo, Chuck Ragan, Charlie Mars, Dave Hause (The Loved Ones), Matthew Ryan, Willie Nile, Tommy Ramone, Alejandro Escovedo, Dave Pulkingham, Walter Lure, Kevn Kinney, Don DiLego, Joe D'Urso, Danny Sage, and Nicole Atkins, and many more to be announced. Those singers will be backed by a band which includes Todd Youth, Matt Romano, and Johnny T. Tickets for the 11/16 and the 11/17 shows are on sale now (ticket options include movie only and show only, and both). A portion of the proceeds will go to Musicians On Call. Note that exact lineups for each date are TBA. Some performers may only be playing one day.

A list of cities the film will screen in and teaser video below...

--
Color Me Obsessed, a name-dropping tease