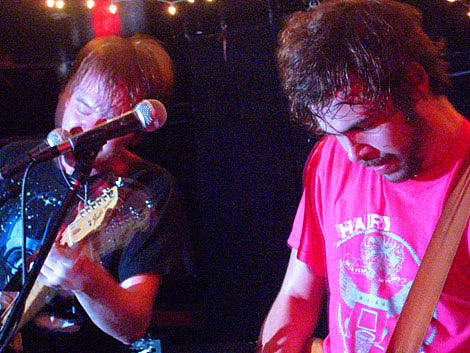 It's been a year since Rooftop Vigilantes last played New York. In the interim, the Lawrence, KS four-piece have wrapped up their second album, Real Pony Glue, and you can download the first released track from that, "Seth No Jump," at the top of this post. These guys are up there with BOAT in in the shambly, anthemic, super-catchy school of indie rock -- and if this sounds a little tighter, more pointed than anything on their debut, there's a reason. The band trekked to Baltimore, MD to record the album with Jawbox/Burning Airlines' J. Robbins behind the boards, which seems like a perfect match with Rooftop Vigilantes' sound which has been described in the past as "a very drunk Fugazi." Says guitarist Zach Campbell:

"I've never really recorded in a situation like that -- it's usually either at my house or at a friends studio on the cheap, etc. We got the chance to go and do it for real, it was rad. It also came with its hangups. We didn't really know anyone in Baltimore, and we all ran out of money so we ended up having to sleep on couches in J's studio, and not shower the whole time after the first night. He was very nice about it, but I'm sure he thought we were all very smelly people."

It's still undetermined who's going to put out the new record, and when it's coming out, but Rooftop Vigilantes will be back in NYC next month for a few shows: Shea Stadium on 3/24 and Cake Shop on March 26 with another show on 3/27 TBD. The band are still putting together an extensive U.S. tour but all March tour dates so far are below (plus some video from Cake Shop last year)...