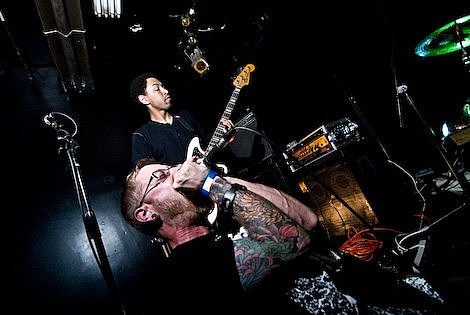 In the age of the post-post-sub-subgenre, it can be a bit tough to carve a niche for your band, let alone make compelling and forward-thinking tunage. Rosetta know how to keep it fresh; the Philadelphia band has continually revamped their approach from LP to LP, drawing from the dreaded "Neur-Isis" gene pool, yet also delving into atmospherics, post-rock, and an amalgam of influences to create their own stew that is as effective on record as it is live (very effective).

Now Rosetta has a new LP, Determinism of Morality, that flexes a bit more of a slimmed down approach, and the results are great. Check out the track "Ayil" available for download above, and pick up a copy of the album on Translation Loss.

Rosetta is scheduled to play FRIDAY (5/28) alongside new Profound Lore signees Ken Mode, the unstoppable Engineer, and Am-Rep-by-way-of-Louisville faves My America as part of a BV/1000Knives production at Union Pool. You can also catch them at an all ages show at ABC No Rio in the afternoon one day later.

All Rosetta tour dates, and some video (including the band performing "Ayil" at Public Assembly) are below...