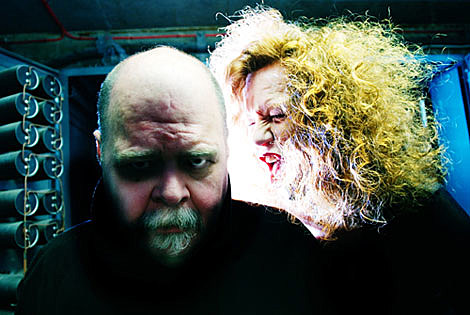 On Wednesday, December 2nd (tonight), Pere Ubu's David Thomas will be appearing at at New School's Alvin Johnson/J. M. Kaplan Hall (66 West 12th St, room 510; 6:30-8pm). The event will be part performance of material from Thomas's spoken word Ghost Line Diaries, part Q&A moderated by Greil Marcus, who's teaching an "Old Weird America" course at the school. The event is open to the public, and to quote from Thomas's UbuProjex site: "Supposedly $5 for non-New Schoolers but no one has ever seen it collected, we are told."

Greil Marcus appeared an an event at Columbia University in November. According to that university's paper, "over 100 people from everywhere on the spectrum of age, music taste, and knowledge of rock gathered to hear Marcus perform the play that was the basis for his book 'Lipstick Traces: A Secret History of the 20th Century.'"

Last year, David Thomas finally got around to adapting Ubu Roi, the 1896 surrealist play that he named his long-running post-punk band, Pere Ubu, after. His stage-show version of the play Bring Me The Head Of Ubu Roi, debuted in London 2008, and a studio release of the songs, dubbed "Long Live Père Ubu!," arrived in CD form this September. There's also a "Radio Play" version, the first half of which is streaming for free. The show had a European run in fall 2009 (a clip from a Paris stop is below) but still hasn't visited the North America. The only currently scheduled date is in Reims, France, on December 16th.

The show is accompanied by stop-motion animation from Brothers Quay. Their video of the hilarious, catchy, scene-setting "Song of the Grocery Police" and dystopic "March of Greed" are posted below...