with a buzz in our ears we play endlessly

Sigur Rós will be releasing their fifth album, Með suð í eyrum við spilum endalaust (English translation: with a buzz in our ears we play endlessly), on June 24th, 2008 on XL Recordings. The first track from the album, entitled "Gobbledigook," will be unveiled with a world exclusive first play on England's Radio 1 tonight (May 27th) by Zane Lowe on the Evening Session. The track will then be available worldwide for free download via www.sigurros.com beginning at 2:30 p.m. EST. The video for the song will also premiere on sigurros.com today. 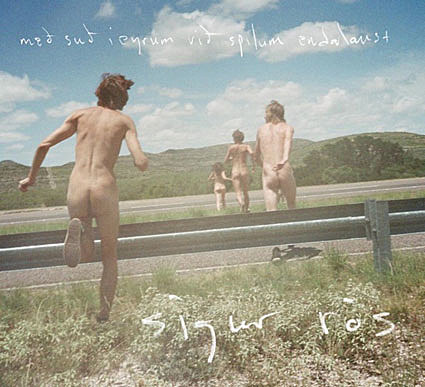 A pre-sale for the album will begin on the band's website on June 2nd; fans who pre-order the album will receive a download of the record a week before the album's release. A special deluxe edition of the album to be released later in the year - featuring a "Making Of..." book, a film and more - will also be available to pre-order on the band's website as of June 2nd. A stream of Með suð í eyrum... will be available to hear on sigurros.com on June 9th. Lastly, a plethora of Sigur Rós goodies - exclusive clips, information on tickets for upcoming shows throughout the year, etc. - will be available to those who sign up for the mailing list on sigurros.com.

Með suð í eyrum... was co-produced with the band by renowned producer Flood, and was recorded in New York City (at Sear Sound Studios), London (at Assault and Battery Studios and Abbey Road), Reykjavík (at Álafoss, the band's studio, as well as a church in Reykjavík), and Havana, Cuba. Whereas Sigur Rós' last release - the critically-acclaimed documentary Heima, chronicling their free tour throughout Iceland - took the band to their homeland, their newest creation, Með suð í eyrum... is the first album in the band's career to be made outside of Iceland. It is also their first album to feature vocalist Jón "Jónsi" Thor Birgisson's vocals in English on one track (the remainder are sung in Icelandic).

Inspired by the unfettered feeling of the acoustic performances filmed during Heima, Sigur Rós decided to adopt a looser approach in the writing and creation of their brilliant fifth album. The material for the album was written, recorded and mixed entirely in 2008 and is being released just one month after its completion. The album glows with the perfect imperfection of live takes, the sounds of fingers playing guitar strings, cracked notes, and a stark, upfront presence not found in previous Sigur Rós recordings, moving away from reverb-soaked guitar sounds towards something altogether more affecting. The record also contains some of the most joyous music the band has ever recorded.

Opener "Gobbledigook" sets the tone for Með suð í eyrum... with its shifting acoustic guitars, playful vocals, time signature swings and swirling percussion, while "Inní mér syngur vitleysingur" ("Within me a lunatic sings") sparkles as one of the most anthemic songs Sigur Rós have ever written. "Festival" is epic in its elation and scope, "Illgresi" features one of Jónsi's finest vocal melodies over a lone acoustic guitar, and "Ára bátur" is the largest musical undertaking in the band's career, as it was recorded live in one take with the London Sinfonietta and London Oratory Boy's Choir, a total of 90 people playing at the same time. The band also utilized the talents of their string-quartet friends Amiina, as well as a five-piece brass section on certain tracks, in addition to introducing the Mellotron into their writing/recording process for the first time on this album, highlighted on one of the most tender and beautiful songs on the record, "Fljótavík."

The spirit of Með suð í eyrum... is best captured by the album's stunning artwork, contributed by acclaimed visual artist Ryan McGinley. McGinley first met the band when he photographed Jónsi six years ago; the album cover was taken from a flyer for McGinley's most recent exhibit, "I Know Where the Summer Goes," which happened to find its way into Jónsi's inbox just as the band was deciding on how to best visually represent their new collection of songs. The result is a perfect synergy of the aural and the visual.

Sigur Rós will be playing shows all over the globe throughout the summer and fall to preview material from Með suð í eyrum við spilum endalaust, including a special set at this year's Bonnaroo Music and Arts Festival. The tour dates are:

More US dates to be announced soon.