Spiritaulized at Radio City in 2010 (more) 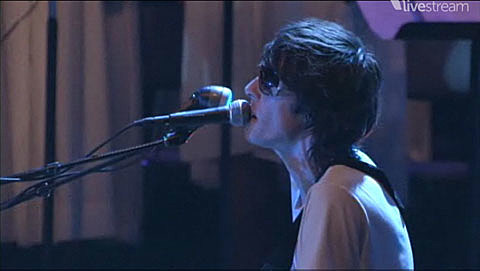 Psych rockers Spiritualized announced last year that they've signed with Fat Possum in the US and Domino imprint Double Six in the UK to release their new album, Sweet Heart Sweet Light, their first since 2008's Songs in A&E. The album was initially set for a March 19 release date but according to an interview with SPIN, the release is being pushed back a few weeks and will likely come out in late March or early April. Spiritualized frontman/main person Jason Pierce said:

had the rather foolish idea last November that I could deliver the record that's been sent out and keep working on the real version. I'd meet the delivery date they need for reviews and things like that and nobody would be any the wiser that I'd be carrying on with the mixing. [The new version of the album] is quite different. People say that all the little mixing moves I'm doing now are just for myself, but to me they're no different than the mixing moves I did at the start of the process. Balancing things is what mixing is. Some bits are more realized and closer to what I wanted them to sound like, but I'm in the unenviable position now where the [album] that's out there isn't finished.

The album's tracklist is below.

Spiritualized already have a number of UK dates scheduled in support of the album, and they've just announced a North American tour, including a NYC show happening on May 7 at Terminal 5. Tickets go on sale Friday (2/3) at noon with an AmEx presale starting Wednesday (2/1) at noon.