Superchunk at South Street Seaport in 2009 (more by Chris LaPutt) 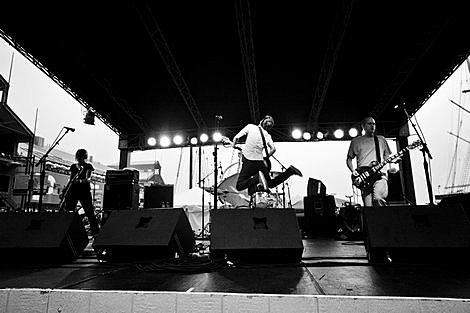 The Daily Tar Heel: What's different about Majesty Shredding as opposed to past Superchunk records?

Mac McCaughan: I think one thing that's really different..., we'd really written all together as a band just playing a lot in the rehearsal space, basically jamming until we had songs, and I would add lyrics on top of that. With the new record, ...I made demos of songs and sent them around to the band so they could hear them and come up with parts, and we'd just get together and rehearse a couple of times before recording. In some ways it's more like our first couple of records.

And the title is a joke that started when we were in the studio. We recorded all the songs live to tape, and the producer, Scott Solter - we were listening to playback with him to see if it was a take we should keep or if we needed to fix something, and so we started this joke where if we heard a fuck-up on our part, we'd say, "Oh, you can fix that with the 'Majesty Shredding' app in Pro Tools, right?" We joked that there was an app that would make everything sound awesome called "Majesty Shredding," and it ended up being the title.

"Hyper Enough" indeed. Superchunk, not satisfied with a pair of soldout shows in NYC at Bowery on 9/28 and MHOW on 9/19 will play a FREE Other Music in-store show on 9/19 (SUNDAY) at 1PM and Late Night with Jimmy Fallon on MONDAY (9/20).

Superchunk's Majesty Shredding (both the noun and the verb) will be showcased at all of the shows, and is available now in digital/vinyl/CD forms. One of those tracks, "Digging For Something", was recently given the video treatment by former Daily Show writer Scott Jacobson, amd features appearances from John Darnielle (The Mountain Goats), comedian Ted Travelstead, and The Love Language among others. Dig on that below.

Superchunk is on board for the Matador 21 shindig in Vegas at the beginning of October, and Superchunk's Mac McCaughan and Laura Ballance recently celebrated the same milestone for their own label, Merge Records (their 20th anniversary party was last year).

Videos and all Superchunk dates are below...

--
Superchunk - "Digging For Something"