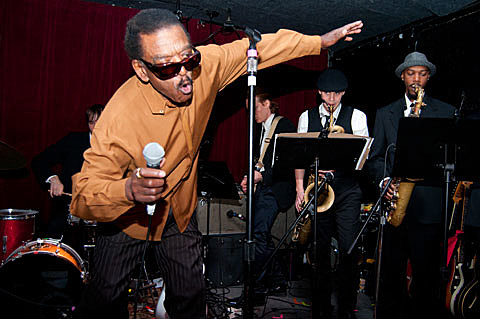 Deep Groove soul singer Syl Johnson will return to the NYC stage to play a headlining date at The Bell House on June 24th. Tickets are on sale. There he'll be supported by The Sweet Divines who are also scheduled to play a show with soul frontman Lee Fields at Southpaw on May 21st. Tickets are on sale for that too, as is the recently-released "My World" instrumentals on vinyl.

Lee's last show was another sold out affair on Friday, April 1st at Music Hall of Williamsburg with Charles Bradley & The Menahan Street Band...

"Bradley left everything he had out on the stage in about 45 minutes and was promptly relieved by headliner Fields, with the Menahan Street Band staying put and subbing for Fields' usual backing group, the Expressions. Looking like a pint-sized Lou Rawls, veteran singer Fields ably continued the retro-exploration into Daptone's dictionary of journeyman soul. As with Bradley, Fields is an older fellow influenced by the torchy, balladic nature of artists like James Brown and Bobby Womack as well as Al Green and the Hi Records crew." [Magnet]

Charles Bradley heads out on tour later this month with instrumental group the Budos Band, who don't have any NYC-area shows scheduled, but who are on the bill of the (gulp) "Dave Matthews Band Caravan" festival taking place in Atlantic City from June 24-26 with The Flaming Lips, Delta Spirit, Dr. Dog and many more.

On a somewhat related note, the funky saxophone great and member of The JB's, Maceo Parker, will play SOB's on May 18th. Tickets are on sale. The show is one of two scheduled for Parker in NYC. He'll also play a FREE show at One Brooklyn Bridge Park on May 12th with DJ Spinna.

The Brooklyn Bridge Park Maceo "Funk Dance Party" is the first in a 3-part series of free 'Celebrate Brooklyn' dance parties at the location. May 19th's "Tropical Dance Party" will feature La Excelencia & Que Bajo?!, and May 26th's "Bhangra Dance Party" will feature Red Baraat & DJ Rekha. They promise "Sweeping views, great lawn, dance lessons, beer garden, bike valet & it's free! Three spring evenings featuring some of the coolest dance bands on the planet, the funkiest DJs under the stars, and the greatest view in the world!"

More tour dates and some videos, below...