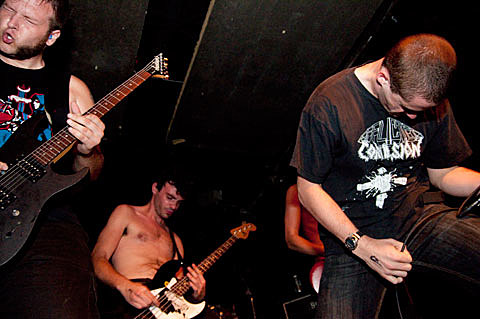 Yet ANOTHER MDF-related tour to get excited about, as Hatred Surge, Mammoth Grinder, and Innumerable Forms (who all toured together last year) will hit the road with Miasmal (mem Martyrdöd) for a string of US dates that will include shows at Maryland Deathfest and Chaos in Tejas. Those dates kick off in Austin and include a Brooklyn show at Acheron on May 24th.

Meanwhile, Mammoth Grinder and Hatred Surge (who now have Rahi of Insect Warfare on vocals) have a split LP on the way via Cyclopean Records. The split is currently on preorder via the label, and features three songs from Mammoth Grinder and four from Hatred Surge. Download a pair of tracks from that record above and stream the entire thing below. Both Mammoth Grinder & Hatred Surge, as well as Scapegoat & Iron Lung will be featured on the upcoming Brutal Supremacy double 7" compilation due via Painkiller Records.

In related news, Cyclopean will also release the final (?) recordings by Iron Age:

The last Iron Age release will be available on March 1st. It will be a 2 song demo tape, and limited to 300 copies. The "Saga Demos" are essentially excerpts taken from our unfinished album "Fate in the Shadow of Eluvimal". They were recorded in our practice space last October and will finally see the light of day before we play our last couple of shows this Spring/Summer. Stay tuned for more info.

No word on if "last couple of shows" means another NYC date. We'll keep you up to date, but until then, the Hatred Surge/Mammoth Grinder split is streaming below, alongside all tour dates...