Karl Hyde of Underworld sees that an empty sequencer isn't the only blank canvas. 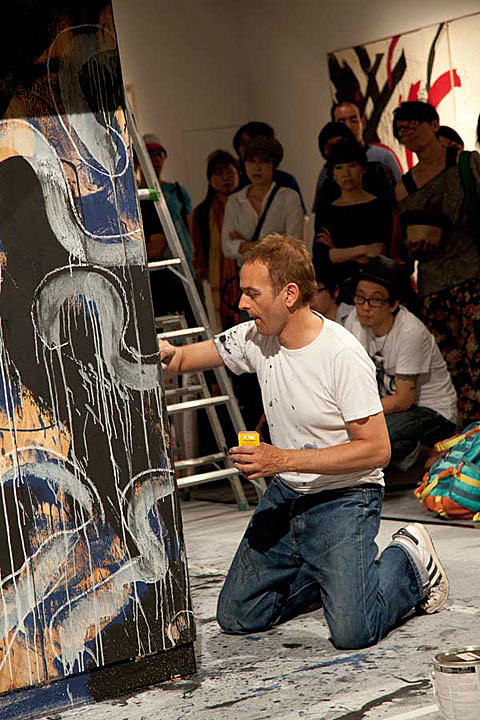 Underworld's new album Barking is on the verge of being freed from it's retail shackles, and will premiere along with accompanying films for the record and a DJ set from DATA at Brooklyn Bowl on Saturday, September 11th. Tickets are on sale for $5 OR you can RSVP to get in for free ("When you arrive, tell the doorperson you are on the GBH guest list").

In addition, Underworld will showcase the record at several live shows including three in the US, one of which is Roseland Ballroom on October 27th. Tickets go on sale at noon TODAY (9/10).

Underworld fan with a severe case of agoraphobia? Talk to a therapist and in the meantime, Barking is streaming in full at the band's myspace and available for preorder in CD/DVD, 2CD, 2LP, digital, and everywhere in between formats.

In other news, Karl Hyde of Underworld recently had a gallery opening in Japan for his paintings entitled "What's Going On In Your Head When You're Dancing?". More info on the gallery and the art is on their website, or in Japanese if you are so inclined. The show closes on 9/15.

All Underworld dates, and videos for "Always Loved A Film" and "Scribble" taken from Barking, are below...

What's going on in your Head when you're Dancing?