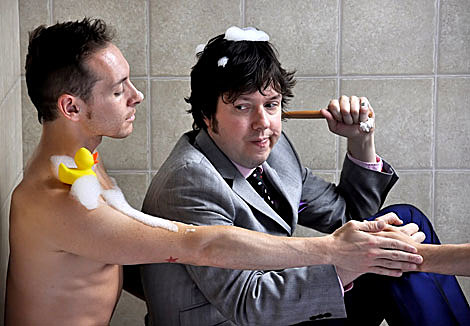 Comedian/musician Dave Hill is a man of many talents, and many projects. One of those projects is his power pop band Valley Lodge ("an unstoppable rock band from New York City" according to their bio).

Valley Lodge came together when John Kimbrough, former singer-guitarist for Minnesota power pop band Walt Mink, met up with comedian/musician Dave Hill (formerly a member of bands such as Cobra Verde, and Sons of Elvis) to compare the home demos they were working on.

Joined by bass player/singer Phil Costello (Satanicide, Tragedy), and drummer Rob Pfeiffer (Sense Field) and inspired by bands such as Cheap Trick, The Raspberries, Thin Lizzy and Big Star they released their eponymous debut in 2005. The album proved particularly popular in Japan even getting a re-release with bonus tracks in 2008. The band went on to tour there in March 2009. [Wikipedia]

That March trip inspired Dave Hill's new one man show "Big in Japan" (which he performs this week in LA).

If Valley Lodge wasn't so busy being unstoppable, I think they would make great sitcom theme song writers. Actually, I think some of their songs should be sitcom theme songs. One such guilty pleasure is the song "All of my Loving" for which they made a brand new, and very shiny, (and NSFW) video. That's a picture from the video above (Dave never loses his sense of humor, even when making music). Check it out below... 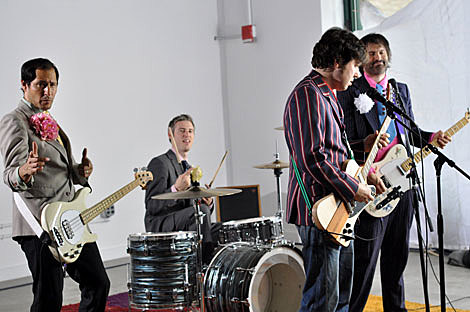