BRIC, the 'driving force' behind the Celebrate Brooklyn! Festival (the free shows in Prospect Park) and Brooklyn Independent Television, have opened a new venue! BRIC House, located in the former Strand Theatre at 647 Fulton Street in downtown Brooklyn (by BAM), had a grand opening party last night with Burning Spear. The party continues Saurday with an all day block party (flyer below, schedule HERE)...

BRIC House architect Thomas Leeser has transformed the historic 1918 Strand Theatre into a state-of-the-art home for BRIC, the driving force behind a number of Brooklyn's most widely renowned and beloved arts and media programs. The renovation has reclaimed 20,000 square feet of additional public space, has created a street-level presence and the full integration of BRIC's visual arts, performing arts, and media programs. BRIC House will include a 3,000-square foot contemporary art gallery, a 240-400 capacity flexible performance space, a glass-walled television studio fully visible to the public lobby, an artist work/performance studio, a public lobby with a café and full state-of-the-art media broadcasting center. The facilities will serve as a home for artists and audiences - a place where emerging and established artists can create work that deepens their practice and engages the diverse communities of Brooklyn.

"Two years ago we launched this project to provide a state-of-the-art home for BRIC and UrbanGlass," said Mayor Bloomberg. "I'm thrilled with the result of this public-private partnership, which has brought an extraordinary addition to the burgeoning Downtown Brooklyn Cultural District, and new and renovated space for unparalleled access to the terrific programming of these two dynamic organizations."

The block party Saturday is free, but tickets are on sale now for shows with Emily Wells, The Bad Plus, and more. 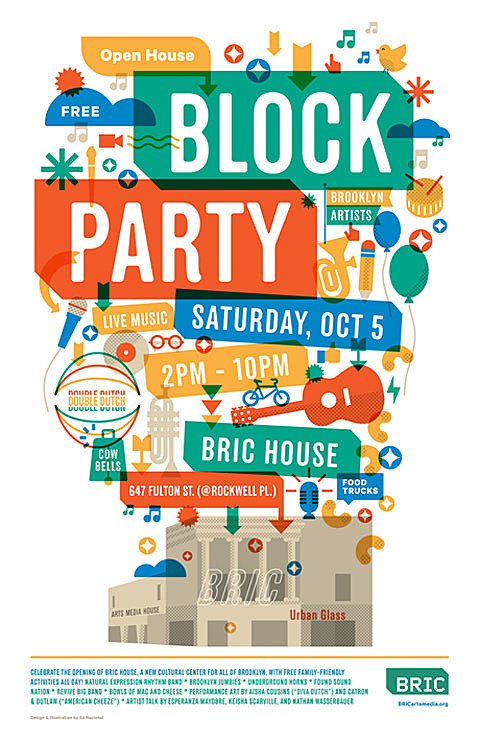