AGORA @ MCCAREN POOL (via Tien who has more) 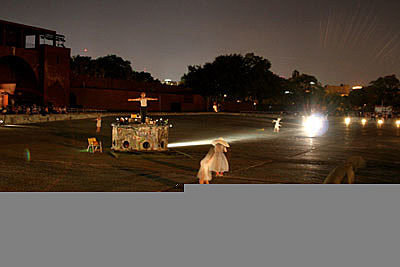 We've all been wondering what's the deal with the Bloc Party/Secret Machines/Mew show at McCarren Pool in Brooklyn this summer. NYU/NY Times has the answer....

The Parks Department estimates the cost of restoring the McCarren pool at upward of $40 million, and at the moment no one is willing to foot the bill.

That is where Ron Delsner Presents (Clear Channel) stepped in. Last summer, the company paid for a modest cleanup so the pool could accommodate an experimental dance performance by Agora, a troupe founded by the French-Canadian choreographer Noémie LaFrance. It was the first public event to grace the graffiti-covered space since it had closed. Because of the donation, Ron Delsner Presents received a contract to present 10 more events this summer.