From their official bio
"New Violators is a newly formed 5-piece from Trondheim, Norway, which, following an already legendary first show at Oslo’s Mono Club during Summer 2006, has quickly become THE name to drop in Norway. Armed with a sound situated somewhere between ‘Born to Run’, ‘Love Will Tear Us Apart’ and Bowie’s ‘Let’s Dance’, the band has already attracted the attention of various tastemakers including Pitchforkmedia’s Brandon Stosuy, who anointed them his favourite Norwegian find at one of this summer’s festivals." 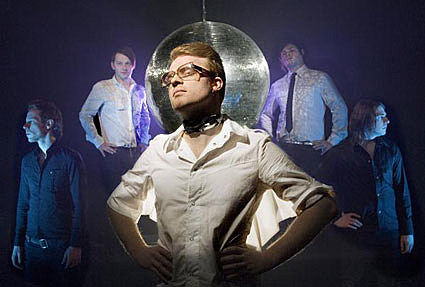 From Oh My Rockness
"Norway's New Violators are a relatively new five-piece that became the talk of last summer's massively popular Oya Festival in Oslo (beating out The Knife, Cold War Kids and even Morrissey). Hey, 45,000 fans can't be wrong. The band plays intensely melodic synth pop that sounds like a much more optimistic Joy Division or the band Stellastarr* was trying to be." [Oh My Rockness]