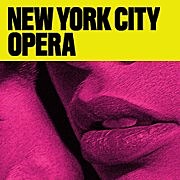 It is curtains for New York City Opera. The 70-year-old company, long a star in the city's cultural firmament, announced on Tuesday morning that its emergency fund-raising appeal had fallen short, and that it would begin the process of dissolving itself and filing for bankruptcy.

"New York City Opera did not achieve the goal of its emergency appeal," Risa B. Heller, a spokeswoman for the company, said in a statement. "Today, the board and management will begin the necessary financial and operational steps to wind down the company including initiating the Chapter 11 process." - [NY Times]

The NYC Opera had needed to raise $7 million by the end of September (including a $1 was to have been via Kickstarter) to stay open. Saturday night's performance (9/28) of Anna Nicole at BAM looks to have been its last. The fat lady has sung, so saying goes, and it's a sad day.